A few weeks ago, I invited you to join me on a walk in downtown Portland, Maine. The other day my husband and I walked through the woods along the Presumpscot River in Gorham. Care to join me as I reminisce? You’ll get to see the ruins of Maine’s oldest and largest gunpowder mill and learn about its place in history. Off we go … 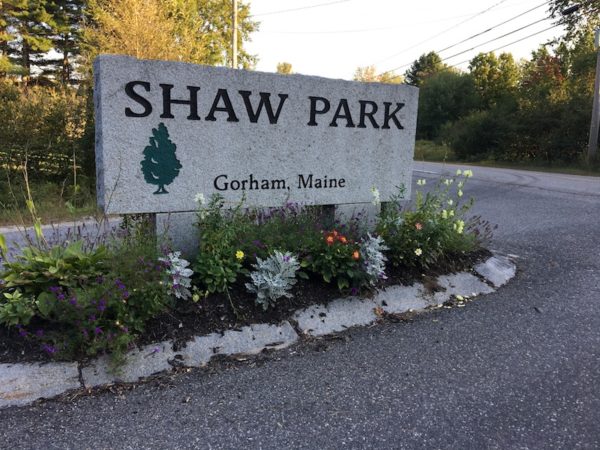 In 2005, Shaw Brothers Construction donated 7.5 acres of land off Route 237 to the town of Gorham and helped develop it as a community riverside park — Shaw Park. We only discovered it a few years ago and now love walking on the different trails there. 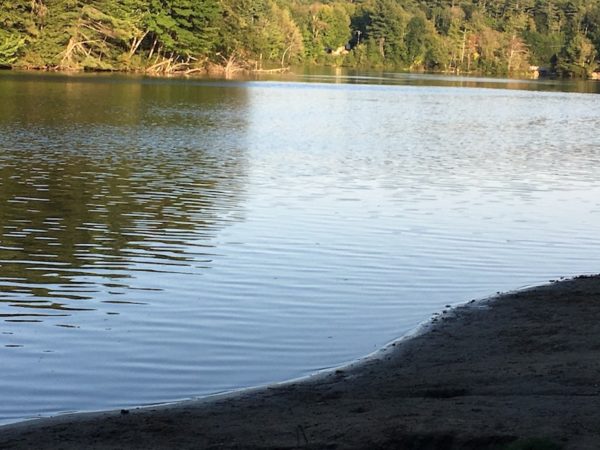 This is a view from the beach at Shaw Park. It was late afternoon and no one was there, but there were plenty of people out on the river. 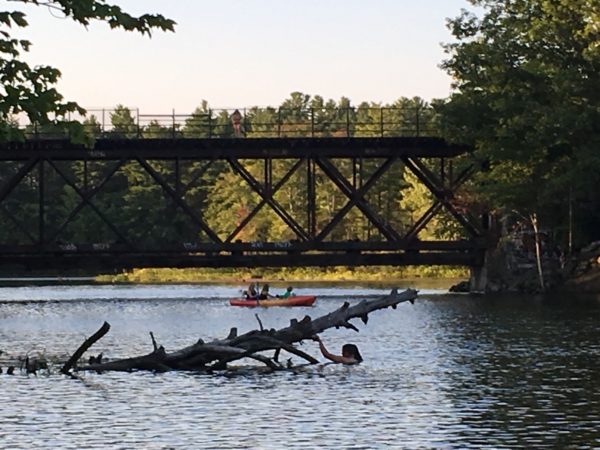 See if you can spot any of the people I saw … not just in the kayak. Look on the railroad bridge and at the tree branch in the water.

The Presumpscot River Trail is a loop that links Shaw Park to the Mountain Division Rail Trail on one side and Gambo Preserve on the left. I’ll tell you about the Preserve when we get there. 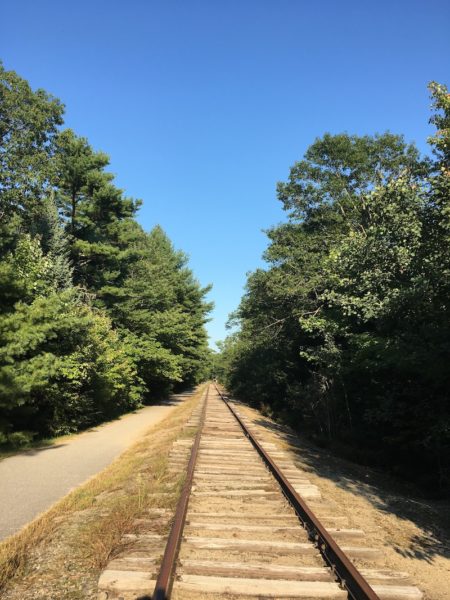 We decided to start our walk on the part of the trail that hooks up with the Mountain Division Rail Trail. 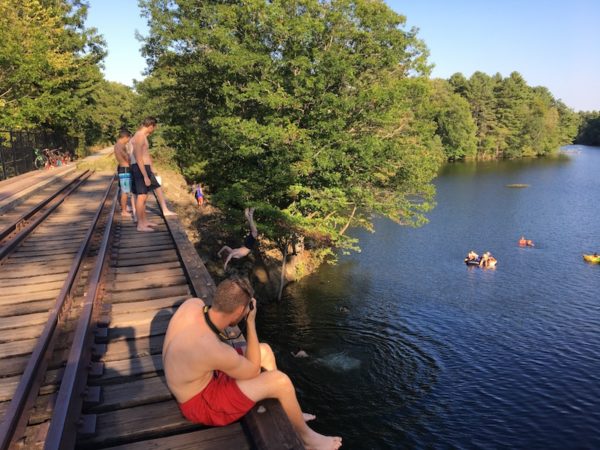 Remember the bridge in a previous picture? You might have noticed the figure of a young woman contemplating jumping into the water. Her friend who just had was urging her to do it, but I waited and waited and she never did. I don’t think I could either. Would you? Above is a view of the bridge from the top. It’s obviously a popular spot. We came to it as we followed the railroad tracks. 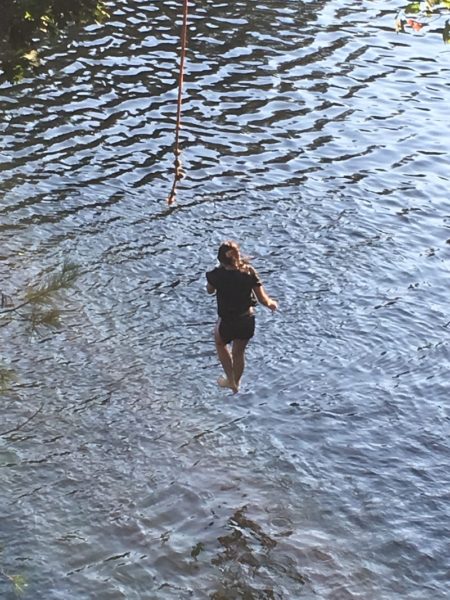 And just over the bridge is an often-used rope swing. 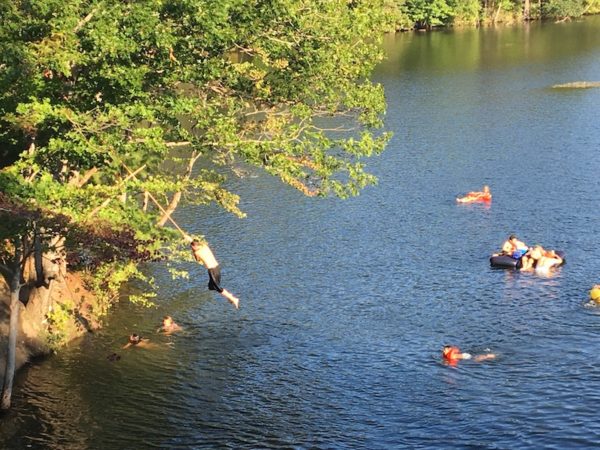 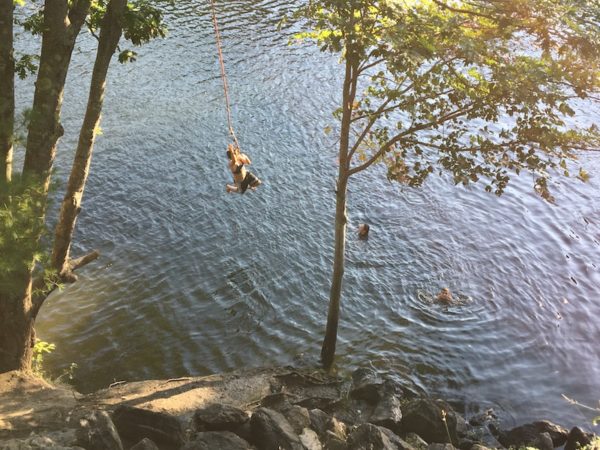 We kept walking (no, we didn’t take a turn on the swing) and eventually came to a pedestrian bridge over Gambo Dam. 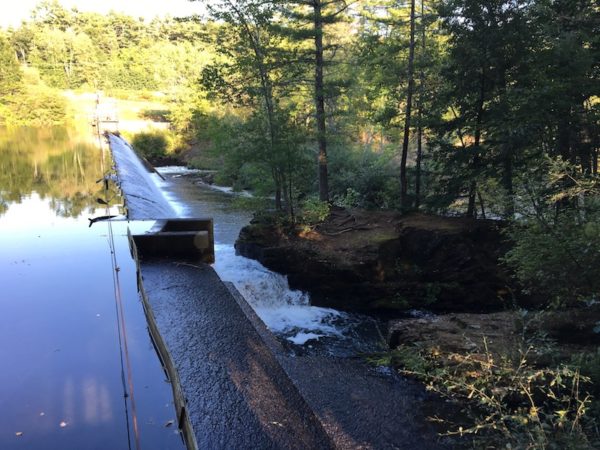 We crossed the bridge and veered onto another trail to our left that led us to the Preserve. There were plenty of signs to point the way and also give a bit of a history lesson. 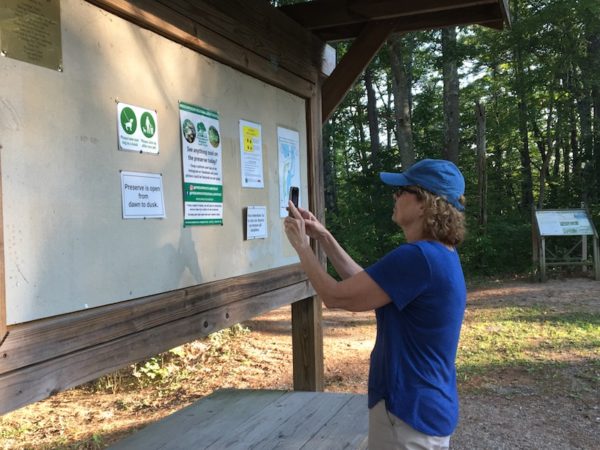 I took pictures so I could keep track of where we were and what we seeing and got some assistance from my husband. I’ll introduce you shortly. Here is some of what we saw as we passed by what’s left of the Cumberland and Oxford Canal and the Oriental Powder Mills, originally called the Gambo Powder Mills. (It seems to be referred to by both names these days.) 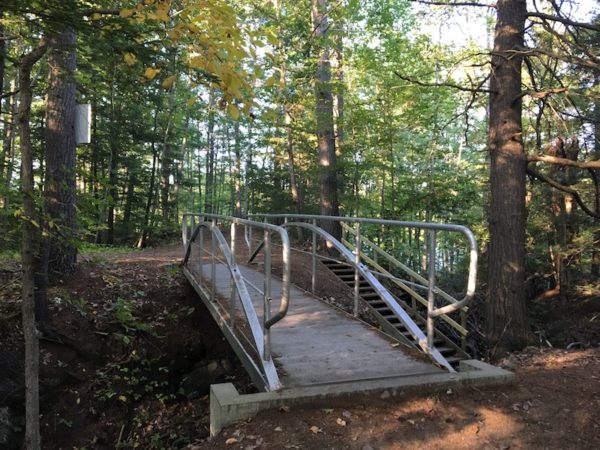 This 1.75-acre site is what is known as Gambo Preserve. It’s owned and maintained by the Presumpscot Regional Land Trust. 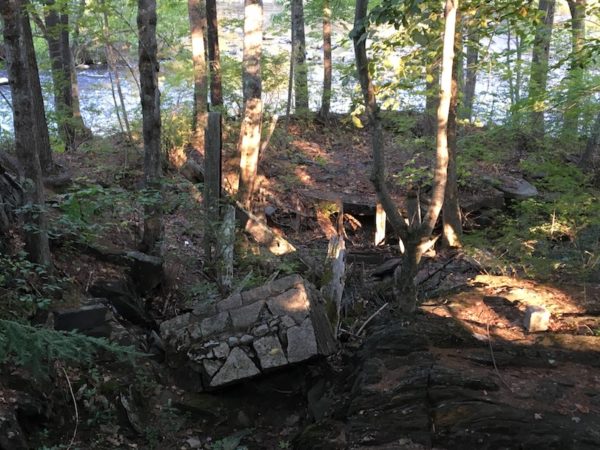 There used to be a sawmill here, but in 1824 it was converted to a gunpowder mill. According to the Maine Memory Network, at that time, gunpowder was only produced on the Gorham side of the river. About 10 years later, they expanded operations to the Windham side as well.

The Gambo Powder Mills played a significant role in the Civil War, which broke out in 1861. They supplied the Union Army with one-quarter of its gunpowder —about 2,500,000 pounds. One of the signs on the trail said daily capacity was 6500 pounds.

In its peak years of production during the Civil War, the Gambo Powder Mills consisted of more than 50 structures spread out along both sides of the Presumpscot River. Maine Memory Network 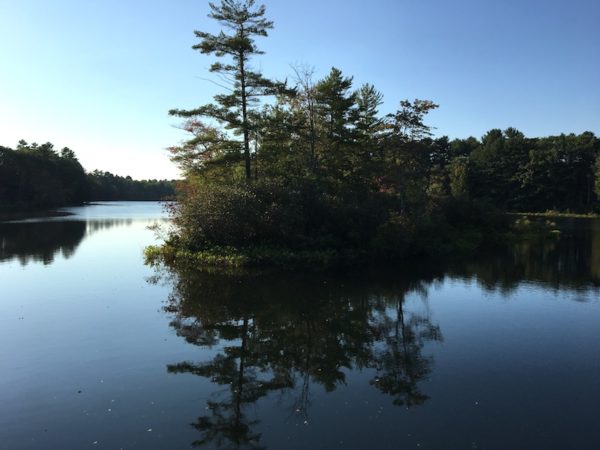 Making gunpowder was extremely dangerous work. The slightest spark could set off explosions capable of demolishing buildings and killing or maiming the workers in or around them. The buildings were separated from one another so that an accidental explosion in one would be confined and not ignite the entire mill operation. Maine Memory Network

One of the buildings was on a little island in the river. The picture of the island (above) was taken from the pedestrian bridge. 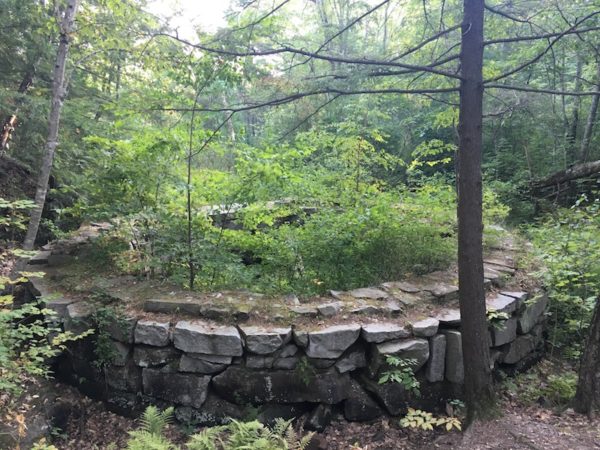 This picture is of the foundation of the wheel mill. Its purpose was to grind and mix the gunpowder ingredients (charcoal, sulfur, and saltpeter) without causing an explosion. 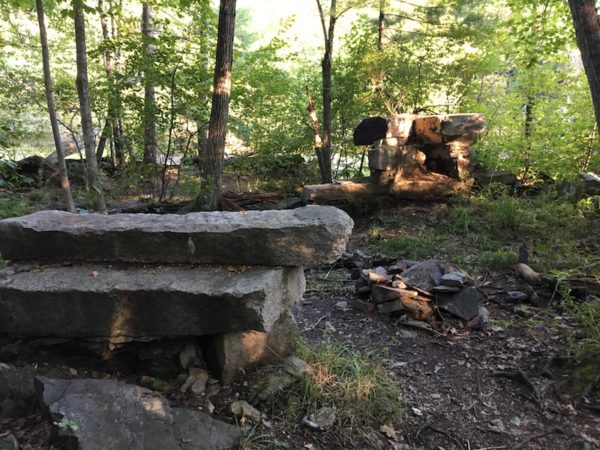 More foundation pieces. I’m not sure what the structure was, but I can tell you that once the gunpowder ingredients were ground into a fine powder it went to the press mill. Water was added to the mixture and it was spread onto square copper sheets. Each sheet was stacked on top of another “… until there was a pile resembling a giant layer cake within a square canvas sack.”

After that, according to the Preservation Regional Land Trust sign, the cakes went to yet another mill on the site to be made into grains. The grains either went to the dry house or were glazed with a small amount of powdered graphite to make them an even higher quality and then put in the dry house to remove any moisture. 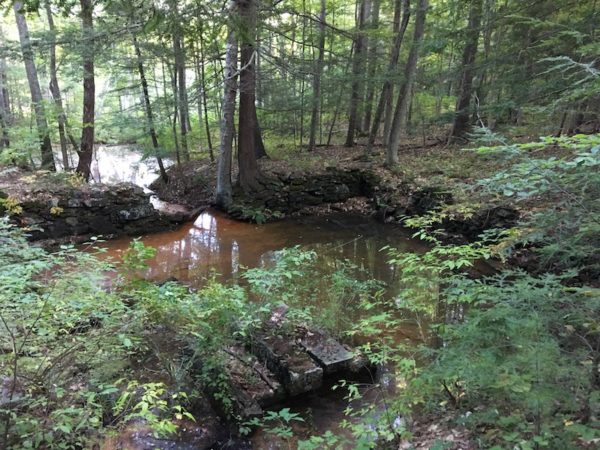 When the Cumberland & Oxford Canal was built in 1830, the mill used it to carry its products to its markets and transport raw materials, which were picked up at the docks in Portland. One was sulfur from Italy and the other was saltpeter from India. 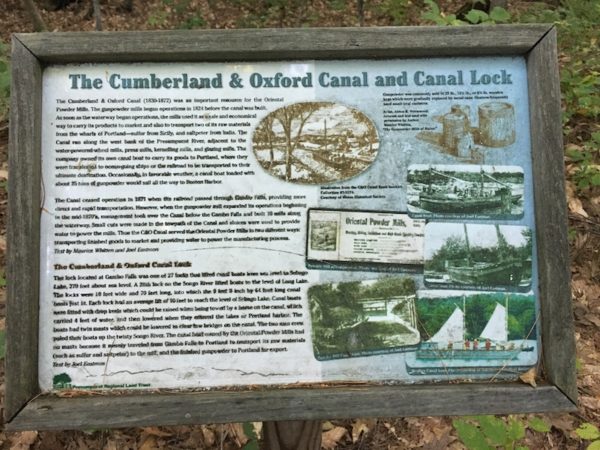 I don’t have a good picture of what remains of the canal, but above is the accompanying sign, which you may be able to read if you enlarge the image. 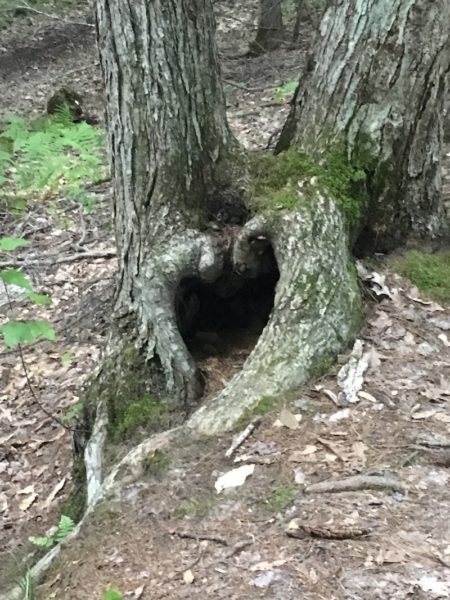 I noticed this tree along the trail and couldn’t help but think of the 45 men who worked in the powder mills from 1828 to 1901 and lost their lives in explosions. Nature’s memorial. The mills were closed in 1905. 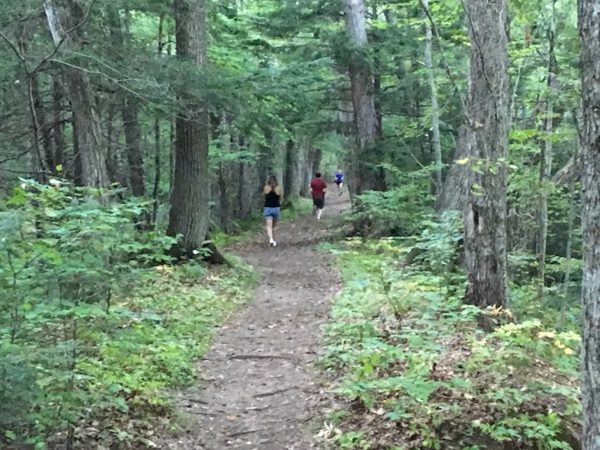 Whichever path you decide to take at Shaw Park, you’re bound to run into people. It’s a popular place for humans and animals, especially dogs. Murphy’s law, we only saw one or two dogs on this walk and I didn’t think to take any pictures. 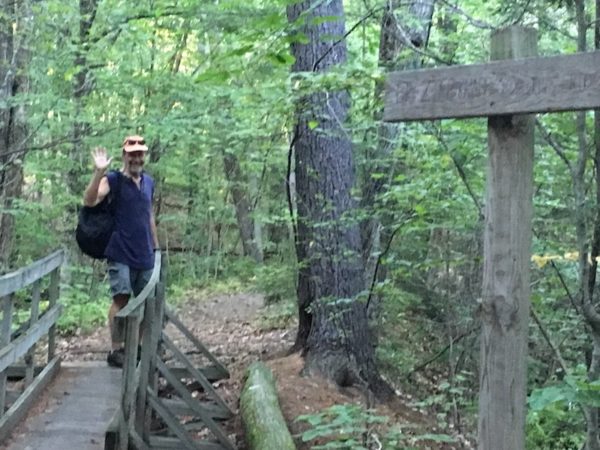 This is my husband, Barry. He LOVES dogs. We have to stop for every dog we meet on the trail. He scootches down and asks each one “Are you the best doggie?” Seriously. You should see how the dogs’ humans eat up the attention. 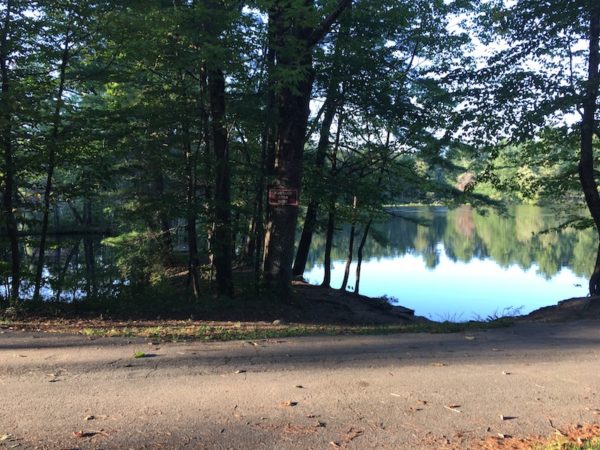 We’re back on the main trail again. This is a view of one of the portage areas. So tranquil. 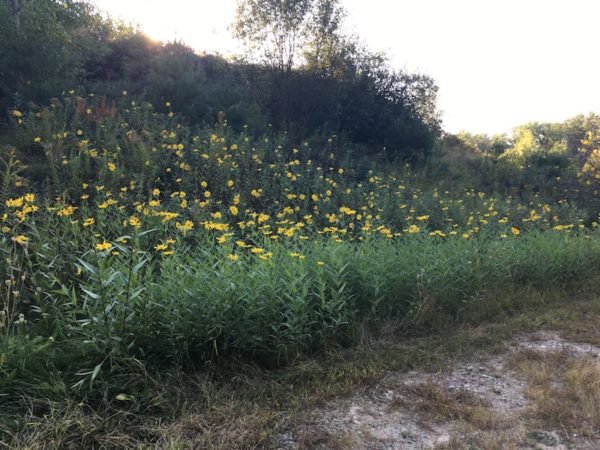 And here are some beautiful flowers. It was the perfect evening for a late summer walk. If you’re in the area, you should go for your own walk. If you bring along your dog and we’re walking too, expect to be stopped by a dog lover. 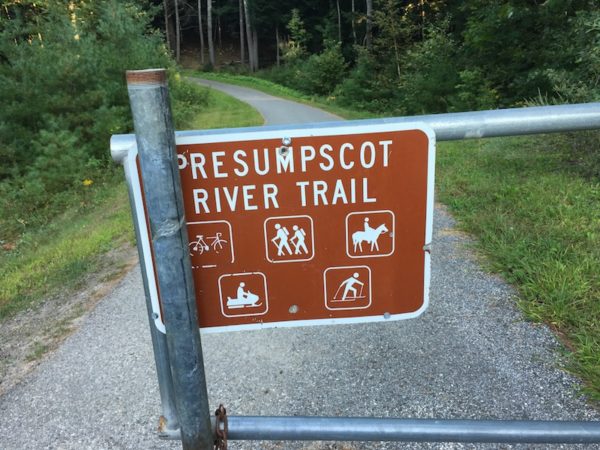 End of the trail for this walk.