What about mushrooms? Are they good for you? This post about mushrooms is courtesy of Joey Bruno, who along with his brother Mike, runs the website Thrive Cuisine. He did a ton of research on the benefits of eating mushrooms and also included information about potential downsides. And if you’ve got a hankering, you’ll find a video recipe for mushroom sliders at the end.

The Basics of Mushrooms

What are Mushrooms Anyway?

Most people are aware that mushrooms are a type of fungus, however, many people are unaware of how complex and important mushrooms are for our health and ecosystem. Some characteristics of these fungi, without getting too biologically technical, are highlighted below:

In simple terms, when you eat a mushroom, you’re eating the “fruiting body” of a larger organism. The primary purpose of the fruiting body is spreading spores through the air to continue the growth of the overall organism.

For the purpose of nutrition, we should consider the most commonly available mushroom in supermarkets, aptly named the “common mushroom.” These mushrooms actually come in two separate colors – white and brown. Baby Bella and Crimini mushrooms are the two types of common mushrooms you’ve likely seen.

In addition to the two most common names listed above, they can also be called: 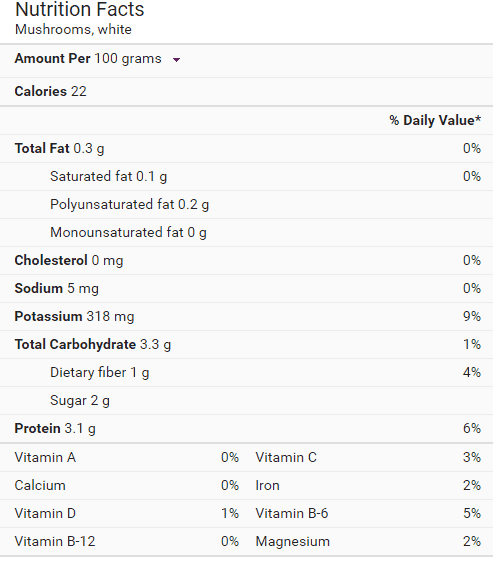 Much like plant foods, mushrooms are low in calories and high in micronutrients. While the above chart shows a low percentage of the vitamins that mushroom contains, it’s important to note that 22 calories of cooked mushrooms would be quite small in terms of portion size and daily caloric needs.

That being said, if you ate 100 calories of mushrooms, you’d be getting around 5X the micronutrient percentages listed on the nutrition facts above. Mushrooms also contain 0.14 grams of protein per calorie which is actually greater than chicken which has 0.11 grams per calorie. If eaten in enough quantity, mushrooms can actually be a decent lean protein source.

Mushrooms and the Immune System

SIgA, short for Secretory immunoglobulin A, is the immune system’s first line of defense for our body’s mucosal surfaces. Mucosal surfaces are membranes made up of epithelial cells. These cells facilitate absorption and secretion in glands and intestines.

Mucosal surfaces line certain tracts and glands in the body including:

These sites are our body’s primary ways of absorbing things from the outside world such as bacteria, viruses and toxins.

Researchers who conducted this study decided to put white button mushrooms to the test to see if consuming them lead to increased levels of SIgA in the saliva.

Being that the mouth is one of our body’s primary mucosal surfaces, having increased levels of SIgA in our saliva increases our ability to fight off bacteria, viruses and toxins from the outside world.

Twenty-four healthy volunteers were asked to eat their normal diet, but the volunteers in the test group were told to consume 100g of blanched white button mushrooms per day for a week. Researchers then tested the participants’ saliva. They found those in the test group had over a 50% increase of SIgA for 2 weeks, which then returned back to baseline by week 3. Researchers, therefore, concluded that white button mushrooms do indeed have potential health benefits for improving immune function on the body’s mucosal surfaces.

It’s also been shown by this study (in vitro/test tube) that mushrooms won’t increase inflammation. Rather, they have an anti-inflammatory effect. This is good news for those who may have an overactive immune system from conditions such as allergies.

Mushrooms and Our Arteries

We know that CVD or cardiovascular disease is the number one killer in Western and developed countries.

“The etiology (development) of CVD involves, in part, a complex process of development and deposition of cholesterol ladened fatty streaks within aortic blood vessels and appears associated with oxidative stress and inflammation” (source)

To simply summarize, the first level of protection against cardiovascular disease would be to avoid high levels of bad (LDL) cholesterol in the blood. The next level of prevention would be avoiding inflammation so that fatty arterial streaks are not developed. In periods of inflammation, certain processes such as monocyte adhesion can occur:

Monocytes are white blood cells that can potentially get absorbed into the cardiovascular system hence the term monocyte adhesion.

These researchers conducted an experiment in vitro (test tube/culture dish) to see if specialty and common mushrooms can inhibit certain cellular processes that are associated with inflammation in the arteries (such as binding of monocytes), which is associated with CVD.

Human aortic endothelial cells were soaked in a control medium or a medium containing extracts of several different mushrooms:

After being incubated overnight, researchers found that the cells that were incubated with the mushrooms bound significantly fewer monocytes in pro-inflammatory conditions which again is an associative factor of CVD.

For those among us who are budget conscious – the common white mushroom actually performed the best, so there’s no reason to go out seeking any kind of expensive and exotic fungi.

Research has shown that an enzyme called aromatase plays a big role in the development of breast cancer. This enzyme is responsible for synthesizing estrogen which can be utilized by tumors to proliferate (source).

Because anti-aromatase phytochemicals are also present in plant foods such as white button mushrooms, researchers decided to investigate whether or not white button mushroom extract in a petri dish (in vitro) could prevent the proliferation of breast cancer cells (study here).

Researchers confirmed that this was indeed the case. They concluded that:

Diets high in mushrooms may modulate the aromatase activity and function in chemoprevention in postmenopausal women by reducing the in situ production of estrogen.

In addition, based on the first study we referenced in which researchers actually tested mushroom extracts in mice – researchers concluded:

This means that you don’t need to eat tons and tons of mushrooms to see the benefits!

Special thanks to Dr. Joel Fuhrman for pointing out this research in his article on mushrooms.  We highly recommend that you check it out to learn more!

While it’s clear that mushrooms have a ton of benefits, it is also important to examine what some potential drawbacks may be. The primary drawback of mushrooms seems to be from consuming them raw.

In this study, scientists took the uncooked common mushroom (Agaricus bisporus) as mentioned above and fed it to mice in a feeding trial to test the very hypothesis of uncooked mushrooms being carcinogenic. Researchers were, unfortunately, able to induce the mice with cancerous tumors in several different areas throughout their body.

However, cooking the mushrooms does reduce their agaritine content substantially, but doesn’t degrade it completely. While the evidence on mushrooms and cancer is far from conclusive, there are still huge health benefits from eating a moderate amount of cooked mushrooms per day.

Given that researchers recommend that you would only need approximately 100 g per day to reap the benefits, we recommend eating mushrooms regularly, but not in overzealous amounts. More isn’t always better. And always cook them!

While they are often overlooked as health promoting foods (compared to fruits and veggies anyway), there is definitely a place for mushroom consumption in a diet focused on well-being and disease prevention. Based on what we learned throughout all the studies, regular white button mushrooms should be consumed regularly (but no need to exceed 100 g per day.)

Just be sure to cook the mushrooms before you eat them! Raw mushrooms don’t taste particularly good anyway!

In Thrive Cuisine’s original blog post, you will find some videos that dive a little deeper into research that been done on the health benefits of mushrooms. You’ll also find some mushroom recipes. Here’s one from The Edgy Veg to get you started.

Thanks, Joey and Thrive Cuisine, for all the great information! Hey, everybody — what’s your favorite mushroom?