Take a look at the picture above. If all you see is a group of people working out, take a closer look. Did you notice the toddlers?

Kids who are kindergarten age or younger are more than welcome to hang around in this fitness class. It’s the Fit-Family Boot Camp at Triple Jump Fitness in Portland, Maine. Owners Kim and Tim DeMado offer several fitness programs for adults and children. As the mother of four, Kim knows what a struggle it can be for new parents to get back in the groove of working out but have little time and no daycare. That’s why she started the Boot Camp. When they first opened Tripe Jump Fitness in 2012, Kim, who was a competitive gymnast, would often teach a gymnastics class to three and four-year-olds while Tim coached their parent(s). But that didn’t work for parents with younger children. And then Kim had an aha moment.

“We started Fit-Family Boot Camp,” she explained, “where you can bring your infant and/or crawler or a child up to age 5 or 6. The kids are in the ball pit, they’re on the gymnastics equipment or crawling on benches and I’m coaching and training.” It’s been an important part of my life,” said Allison McLaughlin, who has a nearly six-year-old son and a three-year-old daughter and has participated in boot camp for several years. “I have to travel for work a lot so I didn’t really have any time to exercise which is always something I enjoyed doing. The Fit-Family Boot camp has allowed me to do that and gives my kids time to play and socialize. I’ve also made some amazing friends.” 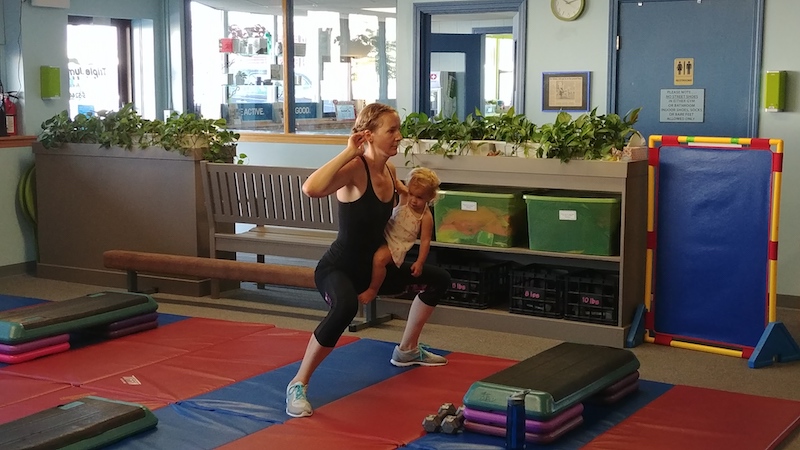 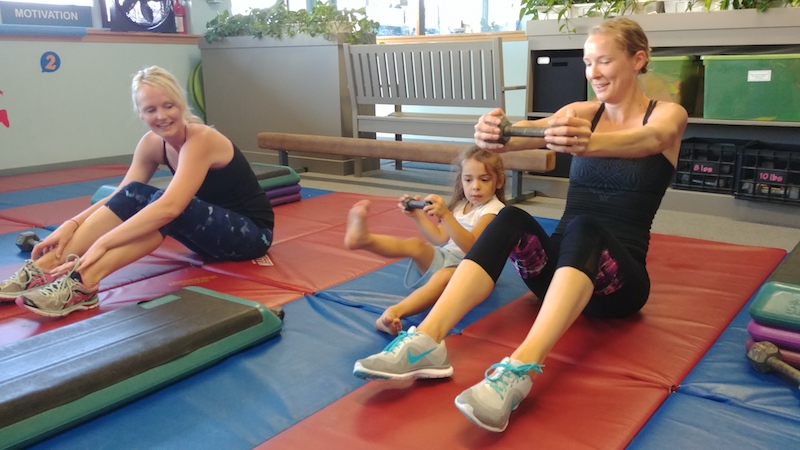 Boot camp is also a big part of Susan Sener’s life. She’s a stay at home mom with three kids.. “I stopped working last October to stay home and I really wasn’t exercising at all,” she told me. “I go three times a week now. It’s amazing. I like that we all do it together and it doesn’t take up my personal time at the end or beginning of the day. My three-year-old did Kim’s gymnastics class and that’s how I discovered Fit-Family Boot Camp.” Kim said they started out with one boot camp class and soon added two more. Now she’s decided to add more boot camps. “We’ve kind of been 9 o’clock across the board,” she said, “but working moms and dads need a bit more flexibility. We’re going to move into the weekends and the later afternoon and early evening for the working parent starting this fall.”

If you’re the parent of young children, how do you manage to fit in fitness? Or is it always the last thing on your list?

For more information about the Fit-Family Boot Camp or other programs at Triple Jump Fitness, check out the website. Also, Kim plans to begin an online fitness program for parents who can’t make it to a class, so stay tuned.