In the middle of his battle against cancer, a Maine man is terrified his health insurance plan is about to be destroyed 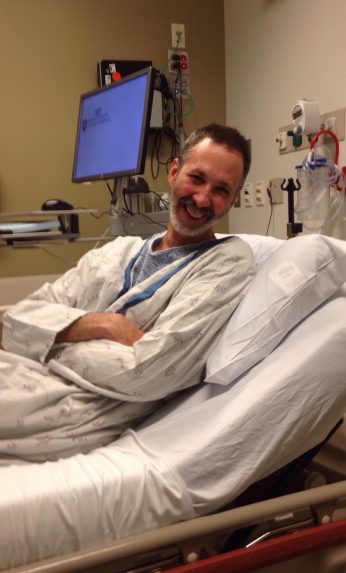 If it weren’t for the Affordable Care Act (ACA), Stretch Tuemmler might be on the road to bankruptcy — or worse if he wasn’t able to access the health care he needs right now.

His story began in June 2016 when he noticed something unusual. “When I was getting up in bed, I rested on my elbow and it was a little tender,” he explained to me. “I went into the bathroom and looked at it. It was this little bump and I was like huh, I must’ve banged myself, I don’t know, should I have that looked at?”

He and his wife Jenny decided he should have it looked at and a few weeks later Stretch was in the operating room at Mass General Hospital in Boston. The little bump turned out to be a fairly rare cancer called sarcoma. “Like a car wreck, my life was suddenly turned upside down,” he said.

Three months after his diagnosis, he was dealt another blow. Cancer cells had traveled from his elbow to his lungs and so, he needed more surgery. If he didn’t have health insurance, he estimates his medical bills would be in the range of one-half million dollars.

The cost of cancer care

“The inconvenient truth is that cancer care is costly,” said Hilary Schneider, who is Maine’s Government Relations Director for the American Cancer Society Cancer Action Network (ACS CAN). “We know that cancer is a leading cause of medical bankruptcy and especially so before the Affordable Care Act.”

ASC CAN is a non-partisan advocacy organization that “works to ensure cancer patients are protected and have adequate, uninterrupted health insurance coverage.” It has a government relations director in each state, as well as a team in Washington, DC.

Hilary said what concerns the organization most is history. “Before the ACA,” she explained, “hundreds of thousands of cancer patients didn’t have access to care because they had pre-existing conditions exclusions, had lifetime or annual limits on coverage, or were unable to obtain an affordable plan that adequately met their needs. So history is what gives us caution. We need to move forward, not backward.”

Stretch is self-employed as a photographer although, since his diagnosis, he hasn’t been able to work much. He recalls the time he bought what he thought was a good policy until the insurance company told him because he had scoliosis, any back issues would not be covered. “I said so if I’m in a car accident and I break my back, it’s not covered? They said that’s right.”

Another insurance company accepted his pre-existing condition and ever since the ACA was passed, it hasn’t been an issue. But if the ACA is repealed, he doesn’t know what will happen to his coverage.

“I’m on a subsidy now. I’m making very little money, so the whole thing terrifies me,” he said. “From what I have seen the replacement bill would be a disaster. It’s good that the pre-existing clause is retained but there are many other problems. The one off the top of my head is the fact that seniors would pay 5x as much as younger people. That’s a lot more than the ACA which is 3x. With Maine having the oldest population in the country, this is something that should be a concern for our state as well as all. I’ve been doing everything I can to make sure that that doesn’t happen.”

Everything includes making phone calls, writing letters and sharing his personal story as well as his concerns with legislators.

The impact of patients’ stories

Hilary said that ACS CAN depends on cancer patients like Stretch to tell their stories. She said that sometimes it’s easy to look at proposals and documents as simply words or numbers on a paper. “That is I believe the power of our organization and why it does the work it does,” she said. “To continually remind policymakers that people and lives are being impacted by these laws and policies. We want to make sure they are aware of that impact when they’re crafting legislation and also when they’re making decisions on how to vote. I’ve watched how the stories combined with the data change policy makers minds.”

When House Republicans recently released their proposal to repeal and replace the ACA, ACS CAN issued a statement saying it would lead to less coverage and higher patient costs. ACS CAN president Chris Hansen said, “ACS CAN has long advocated that any changes to the health care law should provide equal or better coverage for cancer prevention, treatment and follow-up care than what is currently available. These bills have the potential to significantly alter the affordability, availability and quality of health insurance available to cancer patients and survivors. Changing the income-based subsidy to a flat tax credit, combined with reducing the standards for quality insurance could return cancer patients to a world where many are unable to afford meaningful insurance or are left to buy coverage that doesn’t meet their health needs.”

Whenever ACS CAN looks at any health insurance policy proposal (that includes the ACA) it measures it against some key principles, said Hilary. It needs to provide meaningful coverage that’s available, affordable, adequate and administratively simple to understand.

“That’s what we’ll continue to do,” she said. “We’ll evaluate every proposal based on those principles and really work to make sure the voices of patients are heard. As an organization, we are thrilled that we’re hearing so many voices championing those patient protections now but they will not be effective if they’re not part of a package that makes sure that health insurance is also adequate and affordable.”

As ACS CAN continues its work, Stretch will continue to speak out. “I went to Senator Susan Collins’ office with the ACS and shared my story,” he said. “Sure, I’ve got other things I need to be doing but it was a good thing for me to be able to do and I will continue to do that. I know there are problems with the ACA, but there’s a lot of good things about it. It’s helped a lot of people. Why not adjust it? I don’t care if they change it as long as it’s good. You can put someone else’s name on it instead of Obama if that makes people feel better. There is just so much at stake for both me and 20 million other people”

Do you have a story to tell?