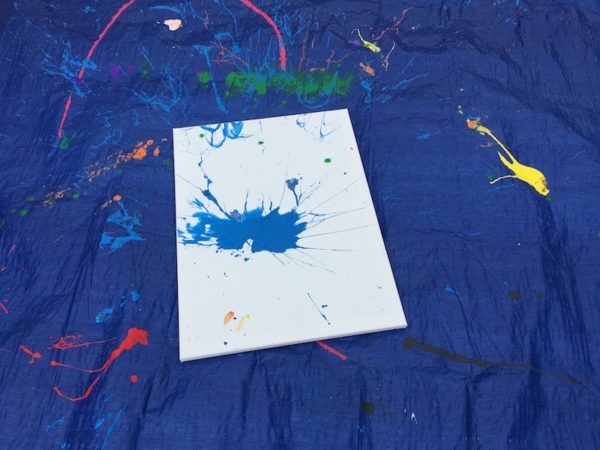 “Close your eyes, Lea Rust told me, “and think about your mum or anyone else you know with Alzheimer’s. “What are three emotions that fill your heart?”

My mother has been gone since September 2016, but it was easy to revisit some of the feelings I had about her and her disease when she was alive. My third emotion had more to do with the present than the past.

What I felt was sadness, frustration, and fear. When I opened my eyes, Lea handed me a small balloon filled with blue paint. On the emotional color wheel, blue represents sadness. She instructed me to walk over to the tarp on the grass. In the middle of it was a blank canvas with lots of small nails poking through the fabric. “Now throw the blue balloon at the canvas,” she said. “it represents your sadness about your mother.”

Lea knew my mother because she is the Sales Director at Avita of Stroudwater, a memory care facility in Westbrook, Maine where my mother lived the last two years of her life. In full disclosure, Avita is a member of Northbridge Companies, which is a Catching Health sponsor.

My second balloon was filled with reddish-maroon colored paint  — frustration, anger, annoyance. When I threw it, my aim wasn’t so great but it sure felt satisfying when the paint exploded against the canvas. Not a smidgeon of frustration.

Getting your emotions out is what throwing the paint balloons is all about. Avita calls the endeavor Project Pollock. “We selected Jackson Pollock as our inspiration,” explained Lea,” because his work is playful, failure-free, and much like Alzheimer’s disease. None of us knows what will happen next.”

The initial inspiration for the project came from a video Robert Foley posted on his Facebook page. Robert is a retired Navy Seal who runs a program for veterans in Maine called Operation Wellness. He conducted the Veterans Day ceremony at Avita in November. Robert was featured in the video talking about an art project developed by Martin Nore from Denmark to help veterans struggling with PTSD. In the abstract expressionistic style of Pollock, they threw paint at canvases, which helped them release emotions that many had carried for years. Robert met Martin when he came to Maine a few years ago and worked with him and other combat vets.

“When I saw the video posted on Robert’s Facebook page,” said Lea, “I thought to myself, this could work for our residents and our family members who live with anxiety and constant fear.”

Avita launched Project Pollock on the Longest Day, an annual fundraising event sponsored by the  Alzheimer’s Association that takes place on the summer solstice. People affected by Alzheimer’s are encouraged to find something they love and do it during that day to help raise money and awareness. 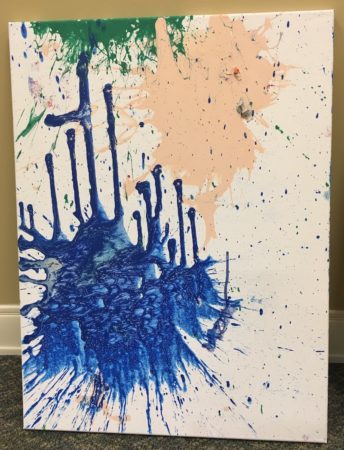 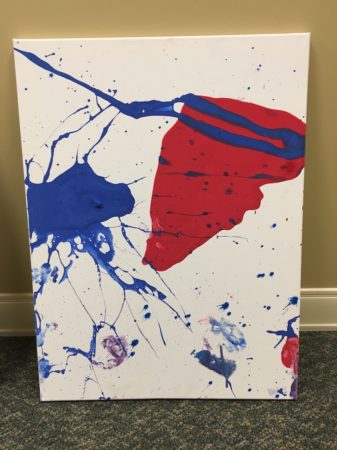 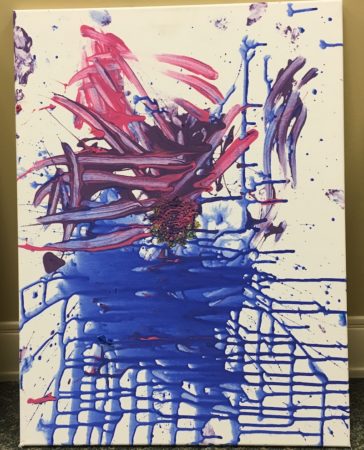 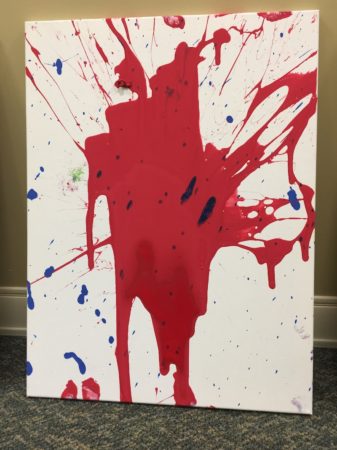 All the artwork created during Project Pollock will be exhibited at Avita of Stroudwater on July and money raised from selling any of the works will go to the Alzheimer’s Association. But the project is not just about raising money or awareness. Like the project for veterans, it’s also about getting in touch with and releasing emotions.

“Project Pollock is an opportunity for us to support the emotional and physical journey of caring for someone with dementia,” said Lea. “and bear witness to friends and loved ones living with dementia. With this disease, everybody says to let it go. You can’t let it go. It’s not going to go away. The pain, sadness will be there as long as the disease is there. But you can let it out. You have to let out those emotions or you’re not going to be taking care of yourself as best you can.” 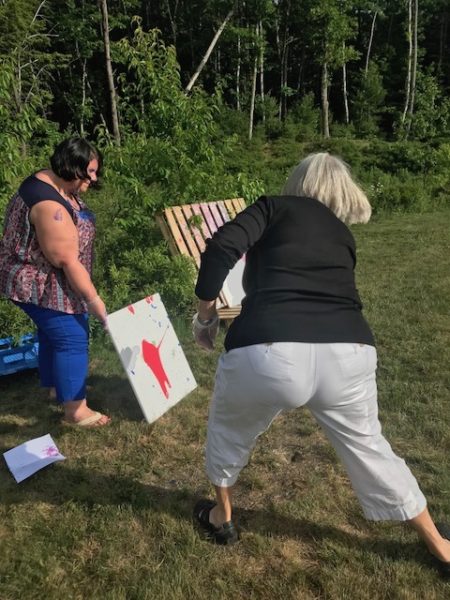 When members of their support group — family members and spouses of people with Alzheimer’s — created their works of art, some surprises surfaced. There was a lot of blue (sadness) and red (anger) on their canvases, but when they started talking about their feelings, a few realized that their anger sometimes masked jealousy. Here’s an example of what that might feel like.

“They see a couple at a grocery store, shopping together, holding hands, doing normal everyday things,” Lea said, “and they don’t have that anymore. So they’re jealous. It’s not that they’re mad, it’s that they’re jealous they don’t have that anymore. Before doing this project, the people didn’t know what to call what they felt. It kind of opened up a new feeling for them.” 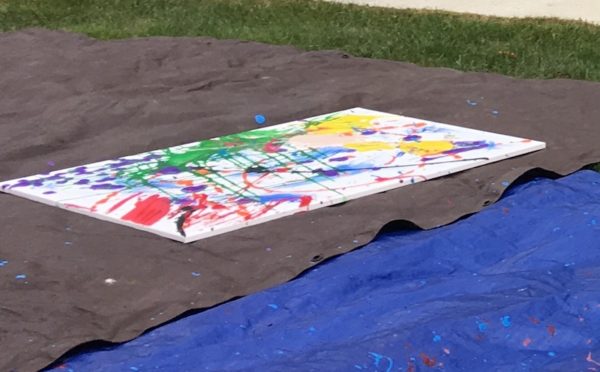 Lea also invited some residents to express their feelings. Green, which represents fear and insecurity, was a dominant color. But unlike the people who loved and cared for them and were more likely to feel sad, many said they were happy, joyful, or peaceful. And that’s why you’ll find bright yellow on their canvases. 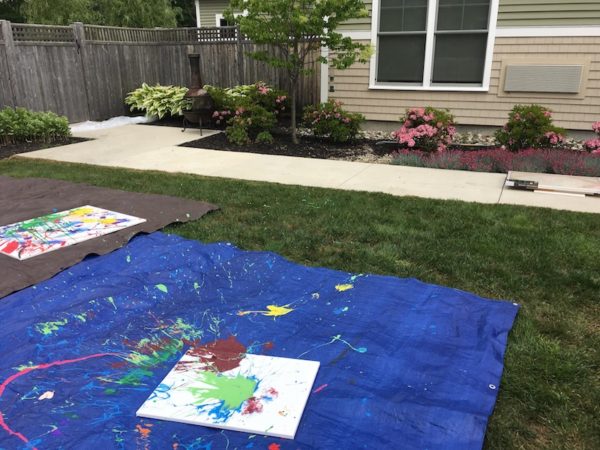 The last balloon I threw was filled with green paint. The others burst open the second they hit the canvas, but I had to throw the green one over and over again. I couldn’t help but think how the sadness and frustration I felt about my mother’s Alzheimer’s have lessened since she died, but fear has not. While I try not to dwell on it, I worry that I will also get the disease. That damn green balloon just didn’t want to break. 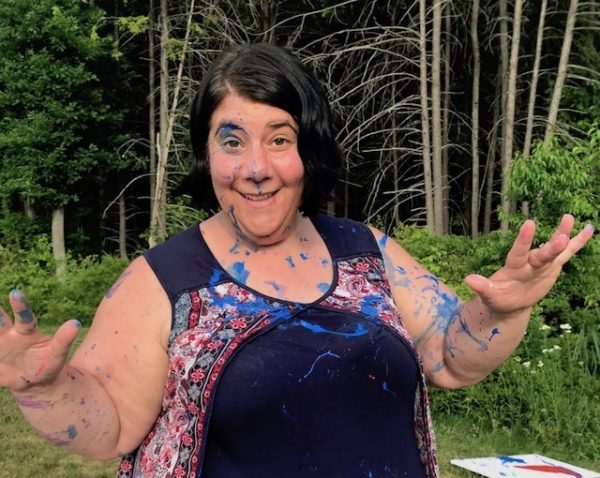 In addition to helping people release their emotions, Project Pollock is a lot of fun. Just ask Lea, who became a human easel for the support group and held their canvases as members threw their balloons. “They were laughing hysterically at me and said getting to cover me with paint was the best part. It was very therapeutic for them.”

For more information about Project Pollock or the upcoming July 26 art show, send Lea an email.