A lifetime of headaches became this woman’s worst nightmare 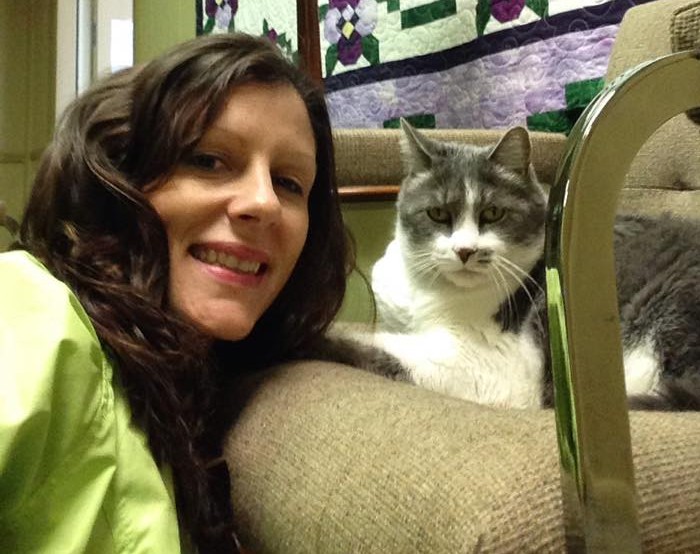 For nearly 30 years — ever since she was about 10 years old — Michelle Spencer endured headaches. Migraines, doctors said.

When she was pregnant with her second child, she passed out cold on a visit to Santa’s Village with her husband and toddler daughter. It can happen during pregnancy she was told.

About four years later, she was on the phone with a friend and suddenly didn’t feel well. Her friend drove over and found her asleep on the bed. For about 24 hours, Michelle couldn’t remember things, like people’s names.

Fast forward to 2000. Her toddler daughter was now in high school and Michelle was getting ready to go to her school concert.  “I remember thinking something wasn’t quite right,” she recently told me. “I tried to talk to my husband and he thought I was joking, but then he could see that my words weren’t coming out right. He wanted to take me to the hospital, but I bounced right back and wanted to go to the concert.”

All of these things were warning signs that something bad, really bad, was going on inside Michelle’s head. But because otherwise she felt healthy and led an extremely active lifestyle, she wasn’t that concerned.

The cause of all those headaches

The bomb dropped on October 5, 2014. “We were at a cross country meet,” she says, “my son was running. I was having a fabulous day. We got into the car and were heading home when I suddenly had major pains in my head and I couldn’t tell my husband. He took one look at my face and immediately knew it was more than a headache.”

In the ER at Eastern Maine Medical Center, Michelle had a CT scan and MRI of her brain. And there it was: the cause of her years of miserable headaches and unexplained “spells.”

Michelle, who is now 40, was born with a tangle of abnormal blood vessels in her brain and all that time, they weren’t carrying blood back and forth from her heart to her brain as they should and they were ballooning under the pressure.

There’s a name for the tangle: Arteriovenous malformation or AVM — a rare condition that happens in less than one percent of the general population. An AVM can develop in blood vessels throughout the body but is more apt to happen in the brain or spine.

The cause is unknown, but as it was in Michelle’s case, AVMs are usually congenital.

An AVM may not cause any signs or symptoms, but if it does, they may include:

In retrospect, Michelle fit the classic picture for an AVM. According to the Mayo Clinic, “Symptoms may begin at any age but usually, emerge between ages 10 and 40. Brain AVMs can damage brain tissue over time. The effects slowly build up and often cause symptoms in early adulthood.”

The biggest risk of having a brain AVM is that it will rupture and bleed into the brain.

That’s exactly what happened to Michelle Spencer. “The neurologist at EMMC could see that not only did I have an AVM on the left side of my brain, but it had burst.”

Arrangements were made for her to be transferred to Tufts Medical Center in Boston for brain surgery. Because the weather was bad, she couldn’t be airlifted. The four and one-half hour ambulance ride was hell — mostly for her family. Michelle was on morphine for the pain and at that point, her memory was nearly gone.

“I was very close to death, “she explains. “If I had a major stroke in the ambulance there is nothing they could have done to prevent it. My family was frantic. One of my biggest upsets is that my children and husband had to go through so much. My kids didn’t know whether I’d be coming home.” 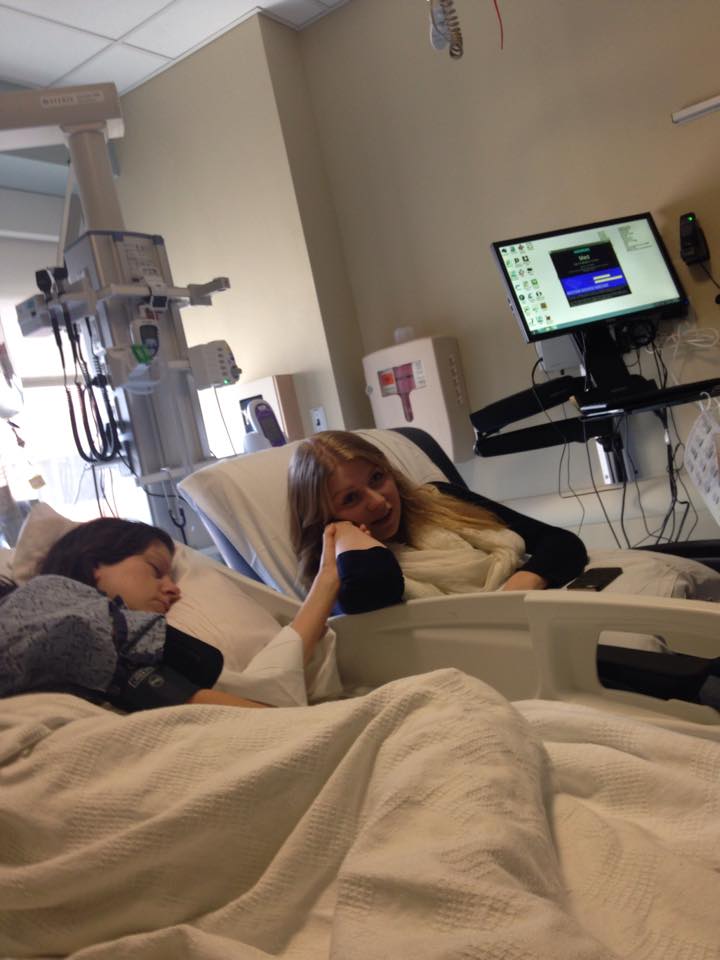 Michelle with her daughter

At Tufts, they didn’t rush her into the operating room. Instead, they stabilized her with medication for nearly two weeks. “In the meantime,” she says, “I could walk and talk although I didn’t always make sense. There were certain words I couldn’t say and I would often use “pen” and “envelope” to replace words.”

On October 16th, Michelle had a procedure called embolization to seal off the abnormal blood vessels and reduce the risk of more bleeding. The next day she underwent eight hours of brain surgery to completely remove the AVM. 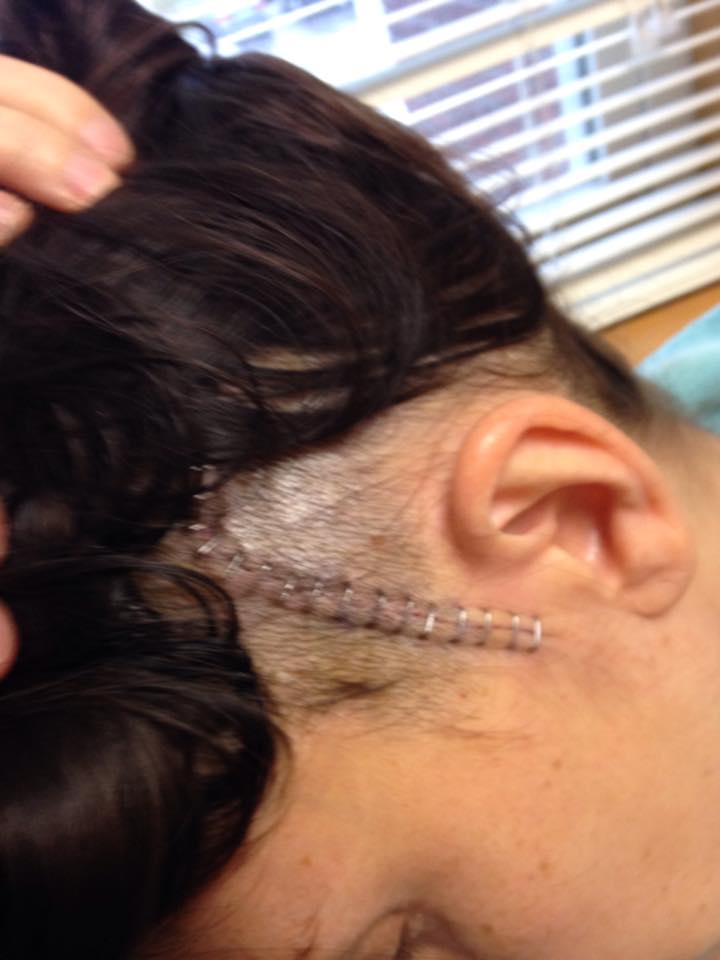 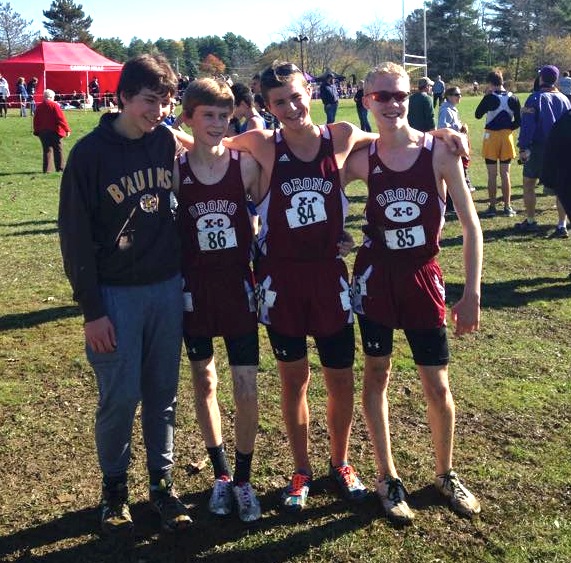 She went home October 21, four days after her brain surgery. On the 25th, she attended her son’s track meet. “This is where it all happened after my son’s race,” she says. “I went on the 25th to watch him again and took this picture.”

Michelle needed embolization and surgery because her AVM ruptured and bled into her brain. Once that happens, the risk is high that it will happen again and so the AVM must be treated says UCLA neurosurgeon Dr. Neil Martin. In addition to surgery and embolization, AVMs can also be treated with focused, stereotactic radiation therapy. Dr. Martin describes the treatment of AVMs in a 38-minute UCLA YouTube video.

Surgery may not be necessary for all AVMs, which Dr. Martin also addresses in the video. The key, he says, is assessing the risk of it rupturing and bleeding into the brain.

Until hers was discovered, Michelle had never even heard of an AVM. It may no longer exist in her brain, but the after effects continue to linger.

“My vision has been impaired right from the beginning,” she says. “In both eyes, I can see from the middle to the left but not to the right. I still have memory issues and I’m still having speech therapy. And I do get tired, but more in my eyes and mental capacity and not physically. The surgeon says it can take up to two years before it’s as good as it’s going to get.”

She sometimes struggles with depression, anxiety and pain, as many people do after an AVM or brain injury. She sees it as a “normal thing due to injuries” and prefers exercise, essential oils and reiki treatments to medications.

Michelle’s life before her AVM ruptured was jam packed: “I have two beautiful kids 18 and 15 and a husband of almost 21 years. I have been a dancer, Curves manager, fitness instructor, fitness center manager, Tai Chi instructor and senior adult worker.”

Her experience may have slowed her down, but it didn’t stop her in her tracks. “I have wanted to get back to work even as I had staples in my skull.” (She’s now teaching a senior fitness class four hours a week.) 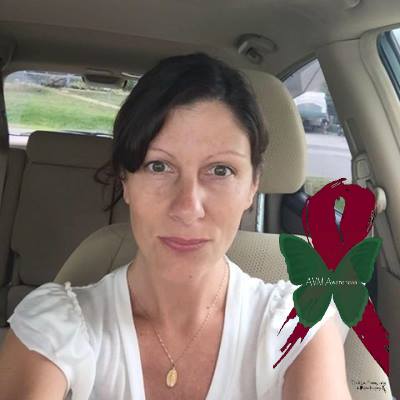 I first wrote about Michelle in May 2015. Two years have passed since her surgery. They haven’t been easy years.

In honor of  AVM awareness month, I asked her to give us an update.

“The past year has been a struggle. Since July 2015, I have had severe pain (headaches, but not regular headaches), fatigue, blurry vision, and dizziness. When all of the issues take place, my memory fails.

Most of the issues are made extremely worse if stress is a factor and I have learned that when you have a brain injury, your stress levels are more severe than an average individual. 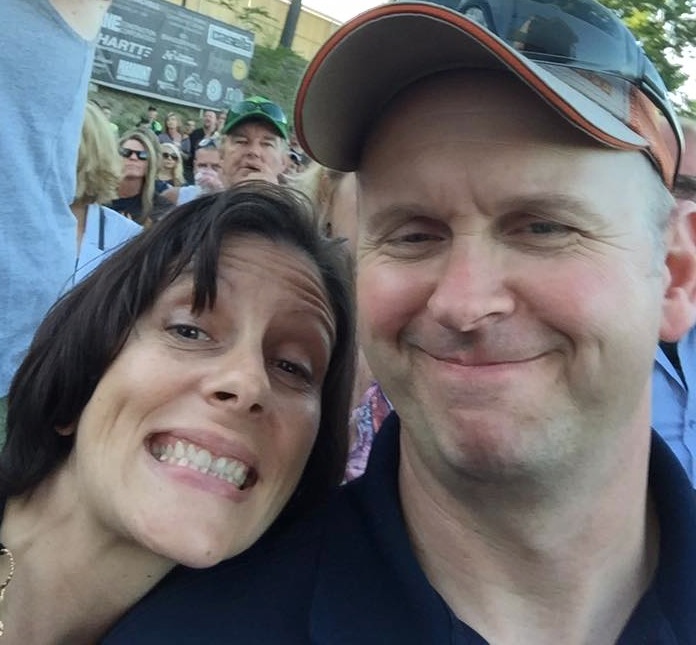 Michelle Spencer and her husband 2016

I’ve learned also, that someone with a brain injury has a different outlook and also is seen in a different way by others (even their friends, family, etc.) I know that it hasn’t been easy for my husband or my children to have our lives changed so dramatically. They were used to being taken care of in every way. It is after the long haul that you find the true loves in your life — whether it be family or friends. A life altering health concern is not for the weary.

I have visited the normal medical model doctors like neurologists, pain management, ER attendance. I’ve had CT’s, MRI’s, EEG, etc., and haven’t gotten any answers to the questions I continue to ask.

Due to extreme pain, I was told that I have nerve pain due to my surgery itself and the scar tissue on the inside and outside of my brain. I asked if it was going to be a long term or life long ordeal and I was told that the doctors hope not. The blurry vision and dizziness were diagnosed as vertigo but my vertigo isn’t treated by the average visit to a Physical Therapist.

Some of the above all go together. Again, I have been told I have strange migraines that include: dizziness, nausea, blurry vision, headache and the memory issues. These are the bad times. Bad times can last for a few hours, a few days ,or a cluster of a couple days a week for a month or so. During those times, it affects my life and the things I want to do.

I also have great days. Days when I feel pretty good. I have the energy to do the things I enjoy which are working, hiking, taking care of my great niece and watching my son run races with a wonderful community of teammates, friends, and parent collaborators.

I believe I have found the middle ground. I had to find it on my own and not get it from a doctor as a diagnosis. On days that I know I just don’t feel great, I need to rest, which probably has been the hardest lesson I have learned.

Until now, I have thought if I allow myself to rest, I am allowing the devil called AVM to win. But, now I believe I am just giving myself a deserved break and then can get up and fight again.”

Even with the challenges she faces, (along with her family and friends) Michelle says the most about thing is that she is alive to even tell her story.