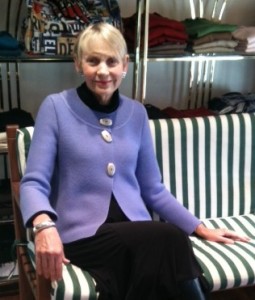 More than 40 years in retail — standing for hours on end several days a week — took its toll on Jane Smith’s legs. Both had bulging, ropy varicose veins running down them, one from thigh to ankle. “These were not small spider veins,” says Jane. “These were big. I used to be embarrassed and always wore pants to hide them.”

Today, Jane’s legs not only look better, they also feel better. Relief came at the hands of Dr. Cindy Asbjornsen, a board-certified family practice physician and a board certified phlebologist or vein specialist. In the “old days” a common treatment for people with varicose veins like Jane’s was to strip the vein — surgically remove it.  It’s still being done, but generally, only with very large veins. Instead, the standard of care is minimally invasive techniques, which can usually be done with a local anesthetic right in the office. Dr. Asbjornsen used two treatments on Jane — ultrasound guided sclerotherapy and endovenous laser ablation.

A key to successful treatment, said Dr. Asbjornsen, is locating the source of the problem. An important search tool is ultrasound. “Ultrasound has changed dramatically in the last 20 years and now it can show quite literally what direction blood is flowing in a vessel,” she explained. “If you stand up, blood in the arteries should flow toward the feet and veins should be carrying blood back up to your heart. If I see it going in the wrong direction, it’s a problem.”

The problem is usually that a valve has stopped working somewhere, preventing blood from returning to the heart. Instead, it flows back down into the legs and pools. The goal is to plug the leak or leaks, which usually takes a series of treatments or combination of treatments. “If you treat the source of the problem,” she said, “your body will just take care of what’s left over. It’s important to realize, though, that you’re you’re not going to wake up the next day with beautiful legs. A lot of times it’s a solid six months after treatment.”

Before and after pictures 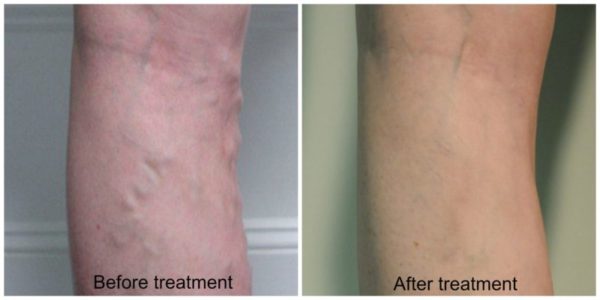 Some people with vein problems may not realize it because they don’t have ropy veins on the outside of their leg like Jane and symptoms can be subtle. A telltale sign is if you wake up feeling fine, but by mid afternoon your legs feel heavy, achy, or tired. You might also notice that your shoes feel tight or your socks leave a mark around your ankle or leg. If your legs only hurt when you are walking and the pain goes away when you stop, the problem may not be in the veins, but in the arteries. It’s important to distinguish between the two because the causes and the treatments are different. Either way, you should see your primary care provider for an accurate diagnosis.

If you have varicose veins it’s likely that your mother or father or both also had them. Add a job that keeps you on your feet all day and your odds of developing them increase even more.

Dr. Asbjornsen recommends that pregnant women in a high-risk category wear compression stockings for the first trimester — from the moment they discover they’re pregnant. The stockings continually squeeze your legs so that blood can flow more efficiently. The first trimester of the first pregnancy is when leaks that can lead to varicose veins often begin even if there are no telltale signs, said Dr. Asbjornsen. All pregnant women can benefit from wearing compression stockings, but especially high-risk women.

Jane said she continues to wear her stockings at work, more out of habit than anything, but also because she’s still on her feet a lot. For many years she also had to deal with recurring ulcers on her lower left leg. Knock on wood, she has been ulcer free for ten months. And she was delighted to report that this past summer (2011) she wore a skirt for the first time in decades!