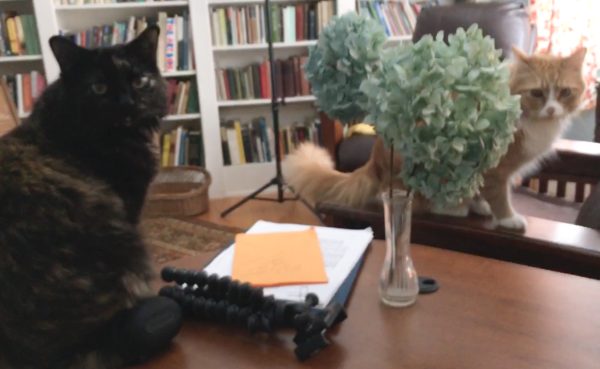 If you were to browse through my photos you’d come across lots of pictures of my two cats Scout (tortie on the left) and Charlotte (tabby on the right). Literary cats, we call them, because they’re named after book characters. In the slightly fuzzy picture above they are appropriately posed in front of my bookshelves and, as usual, successfully distracting me from my work. 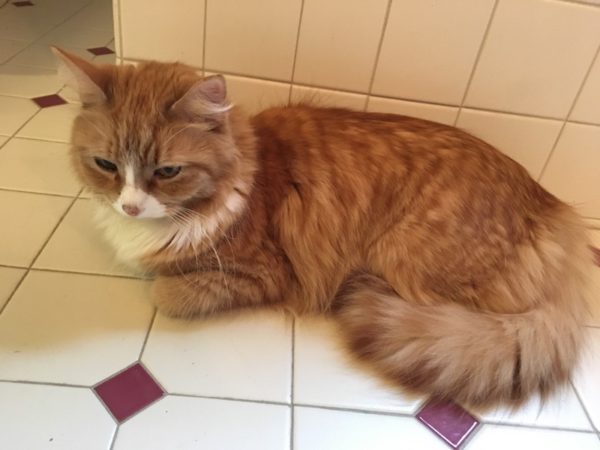 We almost lost Charlotte a few months ago. I never knew that sewing thread could be so treacherous, but I do now and that’s why I’m telling you her story.

The first sign that something was wrong was that she threw up. I’m always finding hairballs, so I wasn’t alarmed. But when I noticed that she had thrown up several small amounts of light frothy liquid in a short period of time, I began to worry. Did she eat something that didn’t agree with her? A mouse? Did she get into a plant?

A normally loving cat who will start purring the moment you walk into the room, she hardly seemed to notice me. Even when I patted her she wouldn’t purr. When she started hiding, I knew something was very wrong.

We took her to Dr. Dave Moody, our vet at Cumberland Animal Clinic. An ultrasound showed what might be a linear object in her intestines but he couldn’t be sure so referred her to the Animal Emergency & Specialty Care Clinic in Portland. Their ultrasound was also inconclusive. The next step was surgery. 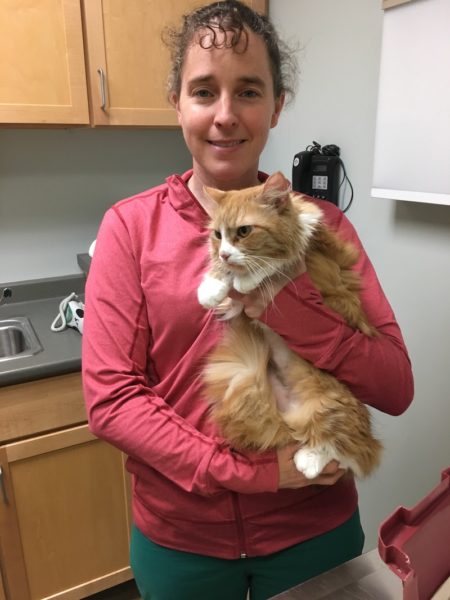 What the surgeon, Dr. Marta Agrodnia, discovered was beyond amazing. Stuck under Charlotte’s tongue way back close to her throat was a piece of sewing thread. The other end was in her large intestine. The middle was wrapped up in her small intestine. It took three internal incisions to cut it out safely.

Under normal circumstances, the GI tract, which includes the esophagus, stomach, small intestine, large intestine, and anus, pushes food and other swallowed objects through and out with no problem. “The GI tract is lined with smooth muscle, which is very different from the muscles in your arms and legs,” Dr. Moody explained. “It exists in sheets of cells that are interconnected and often act as one unit of tissue. The contraction of one cell causes contraction of neighboring cells and creates a pulse wave along a sheet of smooth muscles tissue. It’s like when people do ‘the wave’ at a baseball game. As various segments of the GI tract contract and relax in an organized fashion food moves through.” 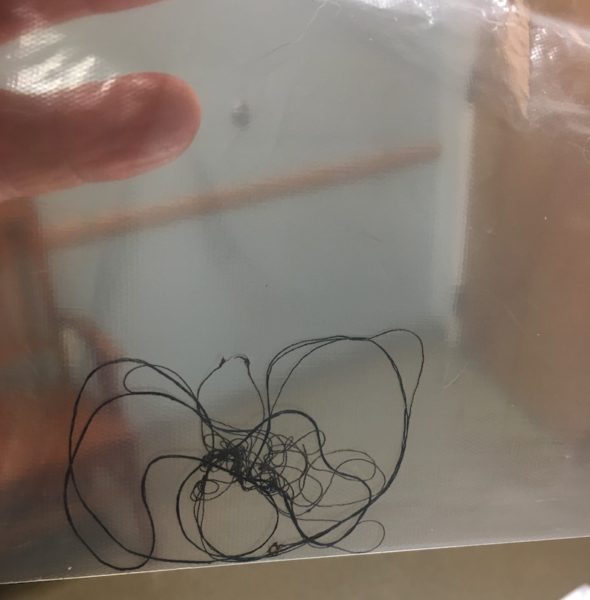 Charlotte’s troubles began when the thread she swallowed got tangled and anchored under her tongue. “If thread gets stuck under their tongue,” said Dr. Agrodnia, “or a wad gets stuck in their stomach and

That’s partly what happened to Charlotte. Her small intestine had wrapped around the thread and bunched up on itself, sort of like an accordion. Fortunately, we got it out before any major damage was done, but the bunching up had caused an obstruction between her small intestine and stomach. Her stomach was filled to the brim, which is why she was vomiting and not eating or drinking. Hiding was a clear sign that she did not feel well at all. 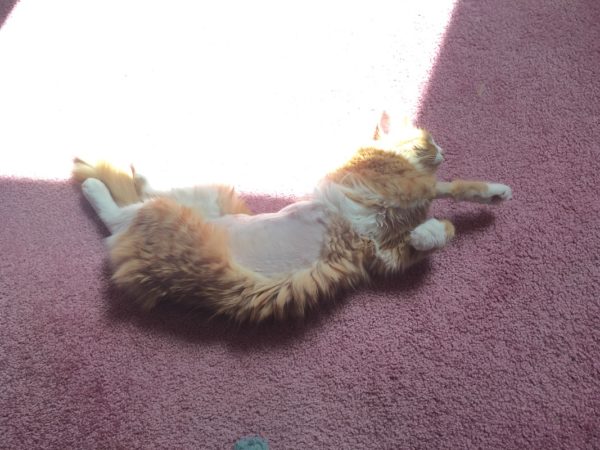 Relaxing at home a few weeks after surgery

In all my years of having cats, I’ve never had something like this happen. Every now and again, I’ve noticed bits of things they’ve eaten and spit up and taken care to find the source and put it away. Christmas ribbon, rubber bands, plant leaves. We learned early on that Charlotte is a cat that likes to chew dangling cords, in particular, Venetian blind cords, which we now try very hard to keep out of her reach. She ruined a necklace because instead of a chain it had a fabric cord that caught her fancy. She’s chewed ribbon markers in my journal and the ties on my painting apron. Thread was not on my radar. It is now!

“We don’t know why some cats will eat sewing thread,” said Dr. Agrodnia, “but it is a repeatable problem among many, many cats. Cats tend to eat more things that we call linear foreign bodies than dogs. Dogs will do pantyhose. I’ve seen some really serious problems with them. The most common linear body for cats is string. You might read about Christmas tree tinsel but that’s actually uncommon.”

Beware of these linear objects

Here’s a list of some linear objects you want to keep away from your cats. 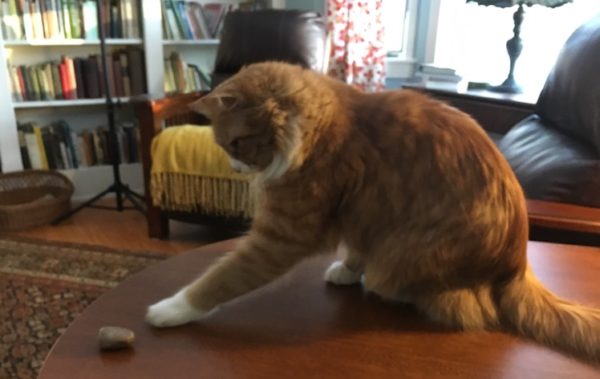 Charlotte recovered nicely from her surgery and is back to her old lovable, mischievous self. We are so, so lucky we acted quickly. My best advice (besides keeping all linear objects out of reach) is to pay attention to any signs that something might not be quite right. No purring? Hiding? Not eating or drinking? They might not mean a thing, but they’re also signs that something could be wrong. If we hadn’t taken her to our vet Dr. Moody when we did, I might be telling you a much different story.