Thanks to his vet back home in Maine, a sweet little dog is on the mend 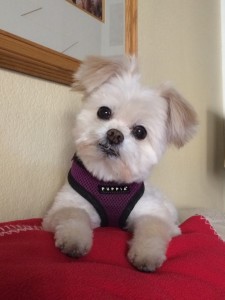 What’s all the fuss?

The fuss is that a few weeks ago sweet little Wiper (yes, that’s his name) was so sick his humans (their names are Russ and Donna) thought he might be dying.

First, his legs kept going out from under him and then one morning, they found him stretched out on their bed rigid and glassy-eyed. His heart was beating, but he wouldn’t respond to anything they said or did. They thought he’d had a stroke.

Terrified, they scooped him up in a blanket and drove straight to the nearest veterinary clinic.

As the vet checked him out and drew blood, Wiper began to perk up a little but was far from his usual mischievous doggy self. He couldn’t even stand up on his own.

Russ and Donna took him home and didn’t sleep a wink that night. Next morning they got a call saying the blood test didn’t show a thing. It might have been good news except it was obvious something was terribly wrong and they were determined to find out. 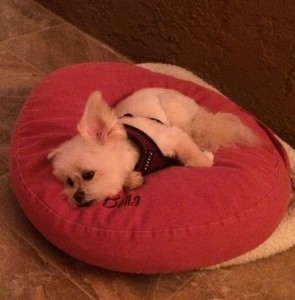 The next thing they did was get a second opinion— from their regular vet back home in Maine — Dr. Thomas Netland at the Cumberland Animal Clinic. (They were in Arizona at the time and had been there for about three months when Wiper became ill.) Without skipping a beat, he asked if Wiper had been tested for any tick-borne illnesses. The answer was no.

I talked with Dr. Netland on the phone. He said that when Donna told him Wiper’s symptoms and that his blood test was normal, the first thing he thought of was a tick-transmitted disease. Because Lyme disease is extremely common in Maine, it was at the top of his list.

“Many diseases, especially tick-transmitted diseases have very strong regional distributions,” he told me. “Veterinarians get used to seeing the diseases that are common in their region over and over again. However, people are traveling with their pets much more frequently than they used to and we have also had a huge increase in the number of dogs rescued from the southern (particularly Gulf Coast) part of the country.”

What that means is that it’s critical for veterinarians to ask if a dog has taken any recent trips. “Just as Lyme and other tick-transmitted diseases could be considered rare in Arizona,” says Dr. Netland, “we are beginning to seem more diseases in Maine that used to considered “southern” or “desert” problems. If you’ve traveled with your pet and your veterinarian doesn’t ask, gently remind her/him of your travel history.”

The Arizona vet did another blood test to screen for several tick-borne illnesses.(The most common tick-borne illness in the area Russ and Donna were visiting is ehrlichiosis or tick fever.) The test confirmed what Dr. Netland had suspected. Wiper had Lyme disease.

The treatment was a 30-day course of the antibiotic Doxycycline. Because he weighs only six pounds, a special dose had to be compounded for him. Within a week or two, sweet little Wiper was feeling better. 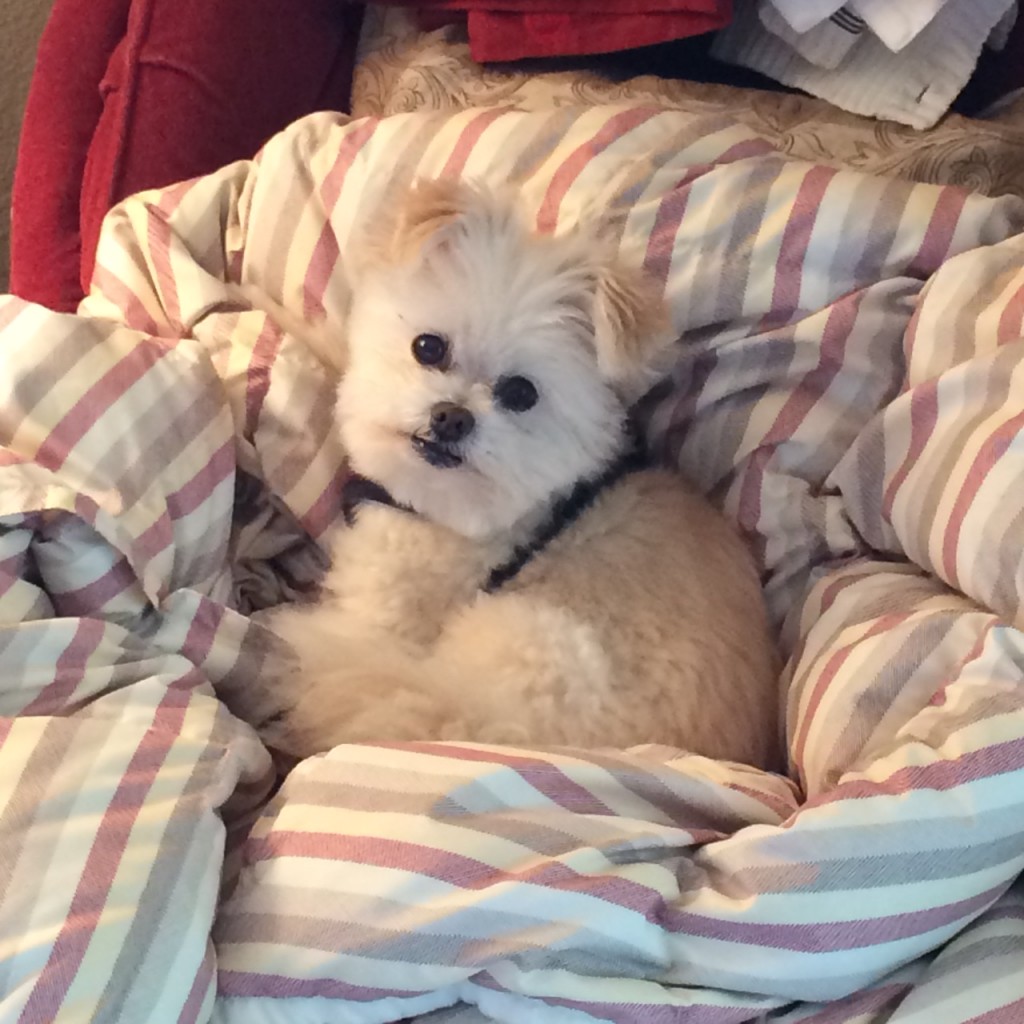 In his own backyard

Back home in Maine, they live in the Portland area, in a development that borders the woods. Even though they never walk him in the woods, they’re always careful to check for ticks. Not easy to spot on a furry little creature, even if he’s light-colored like Wiper. They found one last year, but it wasn’t embedded.

The theory is that he was probably infected sometime late last fall or early winter. If you think ticks hibernate during the winter, you’re wrong! Adult ticks are active even when it’s near freezing. Snow may slow them down, but if the sun comes out and warms the air a few days in a row, be on the lookout.

Wiper may not have been feeling well for a while after he was infected. There’s really no way to tell. Usually, the first visible symptom in dogs is lameness — he began having trouble standing up and walking. The CDC says that 95% of dogs exposed to Lyme disease never show any symptoms at all.

If there are symptoms, they may include:

As with humans, Lyme disease can be tricky to spot and diagnose. In both cases, if it’s caught early, it’s usually easier to treat. The problem is symptoms may not show up for at least two to five months after the tick bite. It’s also possible for a dog to test positive for Lyme, but not have any symptoms, creating a conundrum about whether or not to treat with antibiotics.

The biggest risk for dogs is going outside and being exposed to infected ticks. Any dog or human living in certain parts of the country – like the Northeast – is at increased risk. This map from the CDC shows where Lyme disease is most prevalent in the United States. 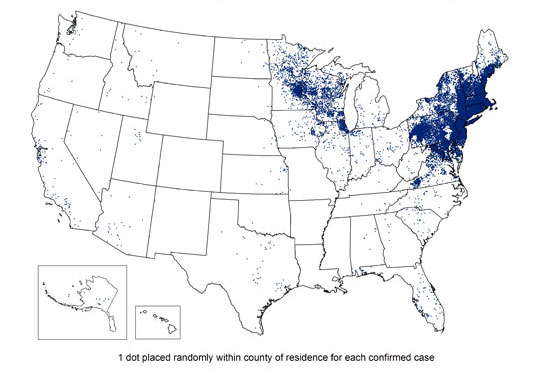 I probably don’t need to remind you, but I will anyway. If your dog has been outdoors, especially if he/she has been romping in a wooded area, check carefully for ticks. In order to cause Lyme disease, an infected tick has to be attached for at least 48 hours. If you find one, remove it immediately.

If it’s embedded and you’re squeamish, you can call your vet for help, but really — learn how to remove a tick! 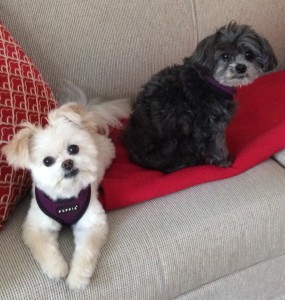 There isn’t a Lyme vaccine for humans yet (unfortunately) but there is one for dogs. Check with your vet to see if getting vaccinated is a good idea for your dog. There are also tick repellents that can be applied topically. Again, check with your vet. Do NOT use YOUR repellent on your dog because it could be poisonous if he/she licks it off.

Donna says they had they had used a topical product in the past, but sadly, didn’t always follow the recommended schedule. Dr. Netland says she’s not alone: “I do have clients who believe their dogs are not at risk for Lyme disease, but I think that as Wiper’s case demonstrates, virtually all dogs that live in Maine (or at least the southern half of the state) are at risk. We recommend annual screening for Lyme disease, Anaplasma and Ehrlichia, along with Heartworm disease.”

Because Wiper got Lyme disease, it means the family must now be on guard for yet another sweet, furry little creature – Bella. Donna and Russ are at also at risk of encountering an infected tick in their own back yard or in their own comfortable bed. That’s because Wiper and Bella and their humans all curl up together at night and if there’s a tick crawling around in doggie fur it might decide the human is a tastier treat. No reason to banish the doggies, but all the more important to do daily tick checks on everyone in the family.

It’s been several weeks now since Wiper started the antibiotics. He’s not limping anymore and is bright-eyed and alert. The only lingering symptom is that he tires easily. But he is on the mend!

I’m sure some of you are wondering, so here’s additional information unrelated to Lyme disease.

Wiper is a Yorkie, Pekingese, Poodle and Lhasa Apso mix and Bella is a Shih-Tzu Poodle. I can confirm that they are both the sweetest little doggies!

If you have any advice or important information about Lyme disease in dogs (or humans), please share in the comment section below. And please share this post so that other dog lovers will be reminded to check for ticks. For more information about Dr. Netland and the Cumberland Animal Clinic, visit their website and/or Facebook page.