Let’s go for a romp with some baby goats 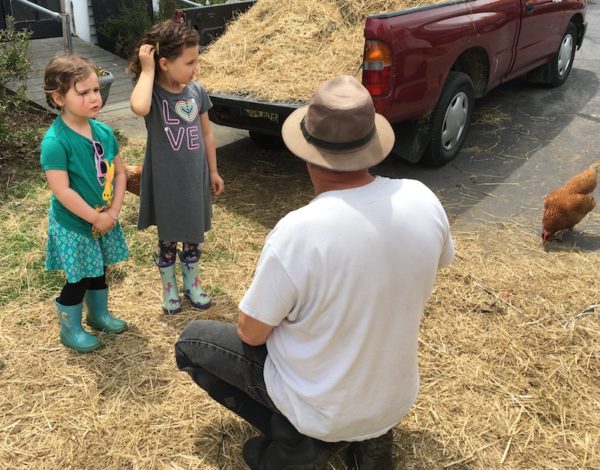 Nora is a bit distracted by a chicken, but her sister Lucia listens intently. They’re visiting their neighbors on the Farm at Conant Homestead in Westbrook, Maine. In a minute, they’ll be romping with some baby goats. First, Michael Shaughnessy, whose family owns the farm, needs to pass along some reassurances. “They’re friendly,” he said. “You can just run along with them and have fun.” 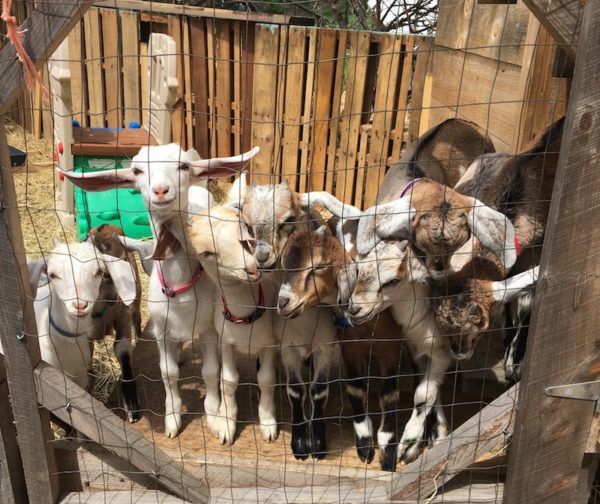 The goats were eager for him to open the gate and set them free to romp and chew some grass. Especially April, who is usually the first one to try anything new. Can you guess which one is April? 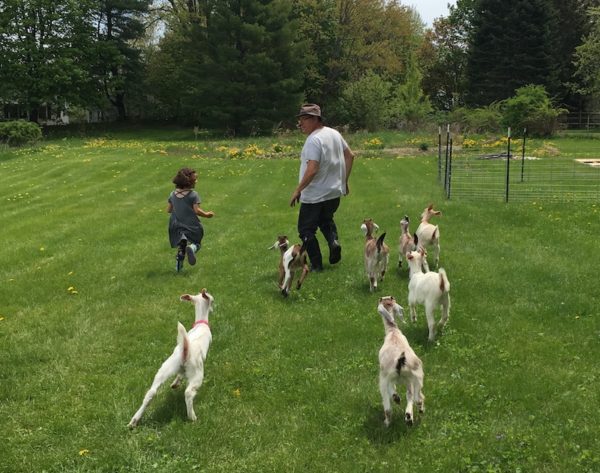 Off they go! When you want them to follow you, you just run and call out “goat, goat, goat” and they won’t be far behind. Destination: Tall grass and dandelions.

The goats were all born within days of each other in late April (2018) to five different mothers and one father. Here’s a family portrait of Everest, Flora, and Fray. 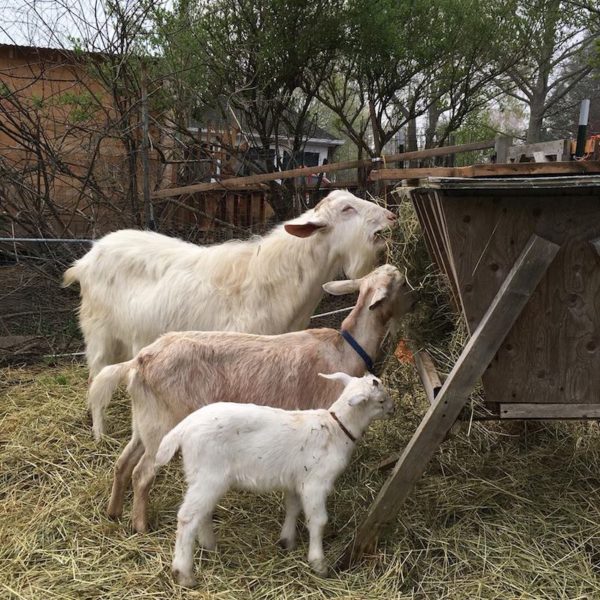 In the beginning, all of the new mothers, except Flora, refused to nurse their babies. It’s a goat thing. Luckily, lots of humans were more than happy to bottle feed them — with a mixture of dry formula and, what else, goat’s milk. They also did quite a bit of goat cuddling.

“People came to help and they had so much fun they brought friends and they all sat with goats in their laps,” said Michael. “There is something about sitting with a goat in your lap that makes you happy and relaxed.” 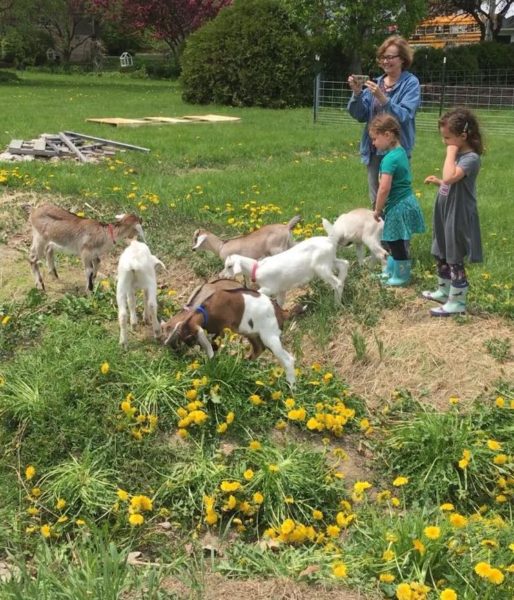 I can attest to the fact that all you need to do is watch them and you’ll feel more relaxed. I couldn’t stop grinning at them or taking their pictures. They are so CUTE! 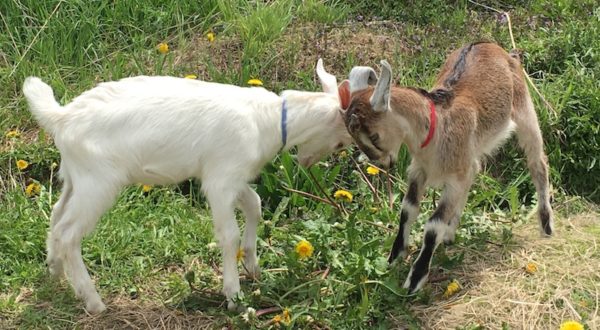 Now that they’re bigger and stronger, they only need one bottle a day. The rest of the time they’re eating grass, grains, and hay — and possibly a few dandelions. 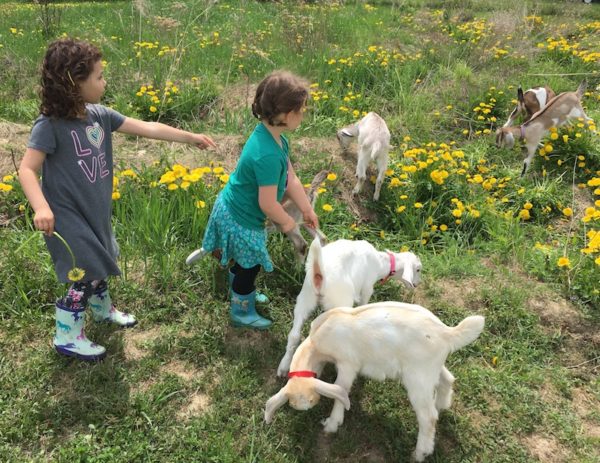 They still need some help with feeding but instead of goat cuddling, now everybody — kids (both kinds) and adults—  get to do a lot of romping. 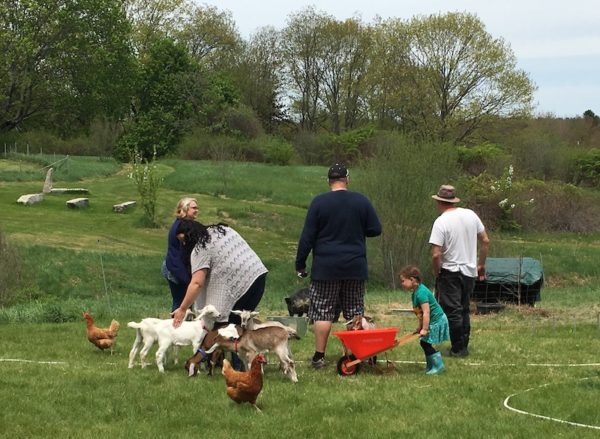 The Farm at Conant Homestead has a long, rich history. Michael and his wife Malory explained to the girl’s parents, Shannon and Steve Pellegrini, that they bought it from the estate of Ellie Conant Saunders, whose family built the home in 1768. Her father, Percy Conant, farmed the property and she saw that it would always remain farmland. “She made sure that the city center stopped at the fence to protect and preserve her father’s farm,” said Malory. “It was almost like it was predestined to be ours. At one time the Conants had three generations living here and we have four, along with goats and pigs and chickens. We’ll be growing vegetables, too.” 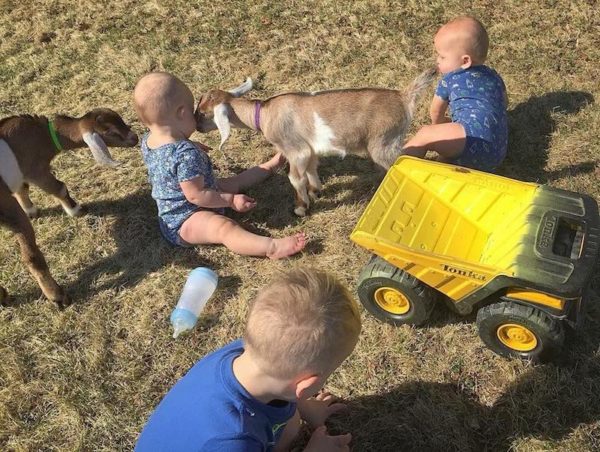 The Shaughnessy’s four generations include their son and his family and Malory’s mother. Even the grandbabies help out with the goats! 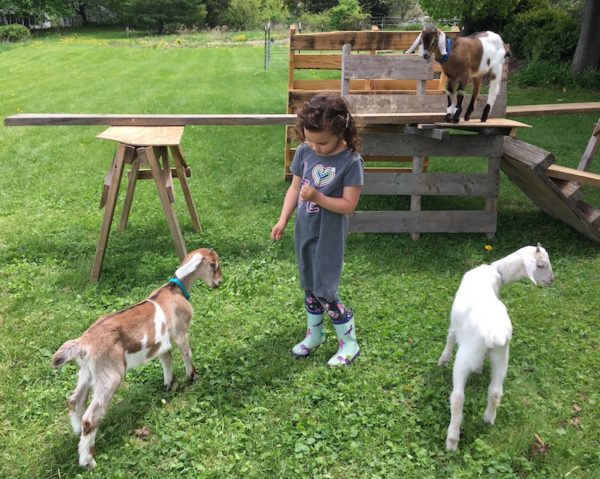 Nora said she thought the goats were cool. “We’re always trying to expose them to animals,” said Shannon, “and to farming.”

“It helps teach them respect for animals because they get to interact with them,” said Steve. “And they’ll talk about this for weeks.” 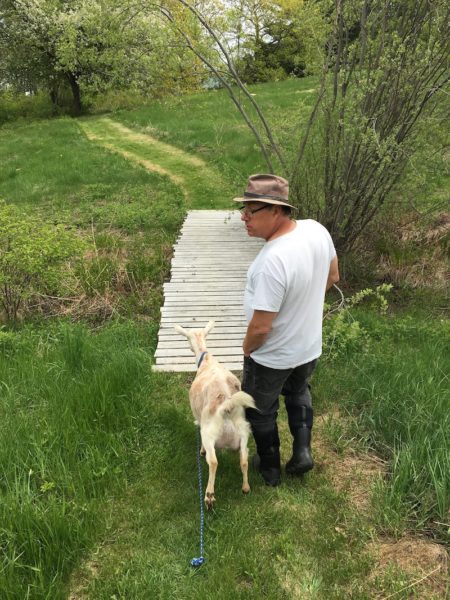 Before long, the baby goat romps will become goat walks along the property and on the Portland Trail which runs alongside and down to the Presumpscot River. It’s a route that Michael and Flora have taken many times already. He carries a little grain in his pocket and she sticks close by. Unless she spots something else to her liking. 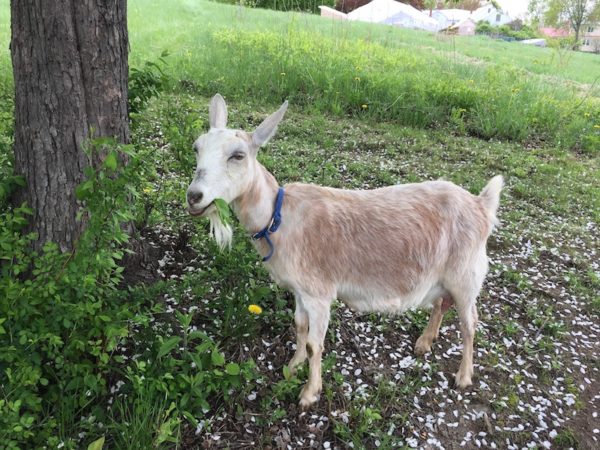 If you’d like to romp or walk with the goats, you find more information on the Farm at Conant Homestead Facebook page. 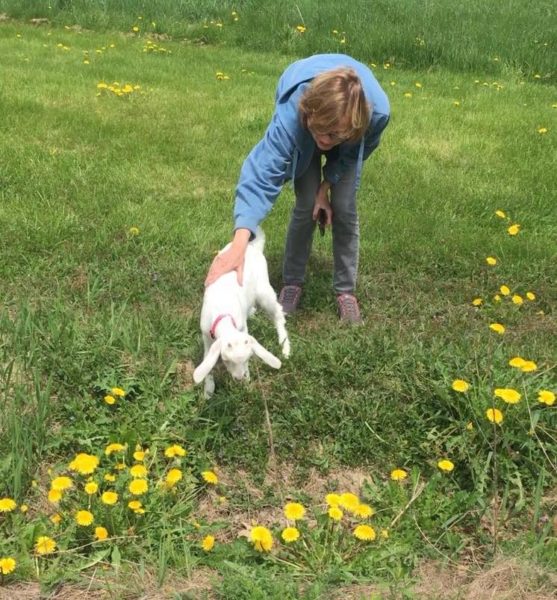 Any kind of physical activity is good for us, but hanging out with goats is also great for our emotional health, insisted Malory. “They just have a presence about them,” she said. “An unconditional ‘love me and I’ll love you back.’ We all need that.”