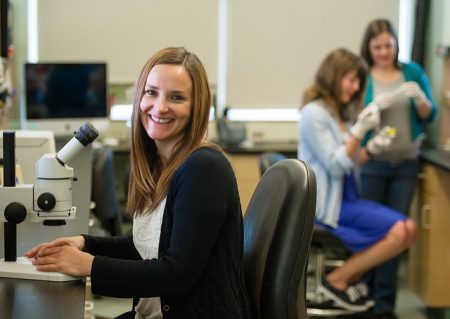 Peripheral neuropathy is usually associated with diabetes, but it’s also a common side effect of some chemotherapy drugs. Sandra Rieger, Ph.D., a scientist at the MDI Biological Laboratory in Bar Harbor, recently discovered where and how neuropathy begins when someone is on chemotherapy. It’s an important finding because ultimately it should lead to some effective treatments.

It’s estimated that about 20 million people in the United States have some form of peripheral neuropathy or damage to the peripheral nervous system. Peripheral means that affected nerves are not in the brain or spinal cord. They’re in more distant areas — the arms and hands, legs and feet, for instance.

Some common symptoms associated with chemotherapy-induced peripheral neuropathy include:

Dr. Rieger was surprised that for such an enormous issue, so little was known about the underlying mechanisms of peripheral neuropathy — how the nerves become damaged. She turned to zebrafish for some answers.

The zebrafish is a tropical freshwater fish that belongs to the minnow family. It may be tiny, but the zebrafish plays a big role in medical research. One of the things it brings to the table for Dr. Rieger’s research is its translucency.

Other traits that make the zebrafish valuable for research like Dr. Rieger’s are that it can regenerate the form and function of almost any body part and because it shares 70 percent of its genes with humans. “I can look in a living zebrafish to see how nerves degenerate or regenerate,” she explained. “Their larvae and embryos are translucent or optically clear so we can visualize nerve fibers or axons in the living animal. We can watch how they behave. I think that’s really key to this problem to approach this problem.”

In this video, you can see what Dr. Rieger sees. She used time-lapse photography over a period of about 12 hours. The fluorescent green marker tracks a nerve fiber spreading through the skin of a zebrafish tail fin (gray). The nerve regeneration occurred in tissue that spontaneously formed to replace a section of a young zebrafish’s tail fin that had been cut off with a laser three days earlier.

What Dr. Rieger discovered from her observations of zebrafish is that nerve damage from at least one chemotherapy drug — Taxol — begins in the outer layer of the skin. “We found when we treat those zebrafish with taxol that the skin of the fish becomes very unhealthy looking and damaged,” she said. “We think that somehow, the skin is less resistant to mechanical pressure or mechanical stress and this leads to nerve degeneration.”

Specifically, the skin starts to have an overabundance of a certain enzyme, which causes the matrix between skin cells and the “glue” that holds them together to break down or degenerate.

Dr. Rieger’s  research team also found two compounds that appear to work against the enzyme. That finding takes her one step closer to developing treatments, a skin cream for instance. But there are many steps to take before she reaches that goal. The next is to study the effect of the compounds on peripheral neuropathy in mammalian models. She is also collaborating with Mayo Clinic to test whether they work on humans.

Chemotherapy-induced peripheral neuropathy goes away in 80 percent of people after they finish their treatments. “But there is this 20 percent who can never reverse the symptoms even long after treatment has been completed,” said Dr. Rieger. “Others develop those extreme side effects right away during treatment and so they have to then quit chemotherapy. If we can administer those compounds together with Taxol, for example, those patients may never even develop the symptoms in the first place and they can be treated all the way to the end.”

How long before a peripheral neuropathy treatment could be available? Dr. Rieger says it’s difficult to say. It took three years to get to this point.

“When I first started my collaboration with Mayo Clinic, I thought we can do it within one year, two years,” she said. “I realized there are a lot of regulations that play into this, even just to do the human analysis has to be approved. It’s very time consuming to do the regulatory part of it and then collecting the samples, I would say at least five years, maybe more.”

A slow and methodical process, but one that may have a lasting effect on the millions of people, not only those undergoing chemotherapy treatments but also people who have peripheral neuropathy because of diabetes. To underscore the importance of Dr. Reiger’s research, she and the MDI Biological Laboratory recently received a grant of $456,500 over two years from the National Institutes of Health (NIH) for the study of peripheral neuropathy.