What is palliative care? Is it the same as hospice? 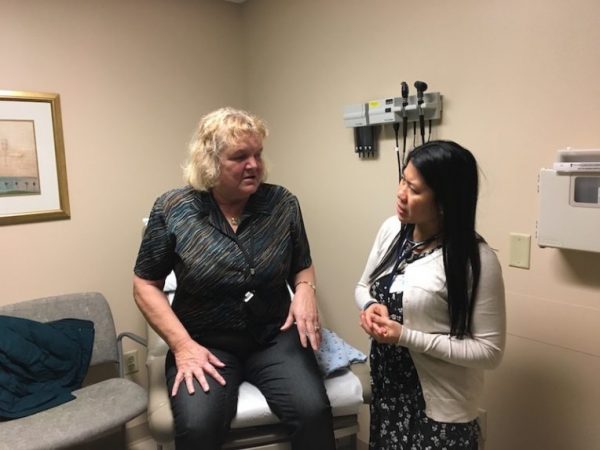 These days, Pamela has all she can to do take a breath. She has end-stage COPD (chronic obstructive pulmonary disease .) I won’t skirt the issue because she certainly doesn’t — she was a smoker and had been since she was nine years old. She tried over and over again to quit and was even involved in a clinical trial.

“My doctor told me there was new drug out to quit smoking —  Chantix — but it was in study at the time,” she said. “In order to join the study to get on the drug, you had to be diagnosed with COPD so he sent me to a pulmonologist who diagnosed me. I was a Chantix guinea pig and it did not work for me.”

Pamela was diagnosed in 2006. By then she was always coughing and raising sputum. She also had pneumonia at least once or twice a year. The disease has progressed to the point that she can no longer work (she was a nurse), is on multiple medications, and in and out of the hospital because of repeated lung infections.

In April 2016 she was back in the hospital. “There was debate over whether or not I was leaving the hospital with hospice care and it really looked like it was going in that direction,” she said. “I know that is end-of-life care.”

Pamela decided instead to opt for palliative care. In addition to her primary care doctor and her lung specialist, she now sees Dr. Lalaine Llanto, a palliative care specialist at Mercy Hospital in Portland, Maine. Dr. LLanto explained the difference between hospice and palliative care.

Hospice is a subset of palliative care. Medicare usually looks at it as the last six months or end-of -ife care. Patients are not getting treatments, they’re just focused on comfort care.

With palliative care, you can be enrolled whether you are getting active treatment or not. It is not hospice. We’re managing your symptoms, giving you the best possible quality of life while you are undergoing treatment for your cancer or whatever life limiting condition you have.

How palliative care is helping Pamela

Pamela knows she’s not going to get any better, but under Dr. Llanto’s care, she says she’s been given back the “control to say how I live the rest of my life.”

For example, she asked her primary care doctor about prescribing morphine to help make it easier for her to breathe and she said he was reluctant. “He said, ‘Do you want to die in two weeks? If you do, I’ll give you morphine.”‘

It was at that point that Pamela was referred to palliative care. “Dr. LLanto and I actually did a morphine trial,” she said. “For some reason, it made my heart pound and it made my pain worse, but she was willing to look at using morphine in a different way and in right dosages. She is trained in how to give medication to keep pain and some other symptoms under control. Something another doctor won’t touch. She knows better.”

Pamela now takes Dilaudid, which does work for her. Enough that she says she still has a decent quality of life. “My quality of life right now is being with my grandchildren and being as supportive as I can to my husband.”

Her lung specialist suggested that she get on the list for a transplant, but for various reasons, she decided against the idea. She is open to other possible treatments that might give her some added time. “There are things I have applied for even though I don’t want a transplant,” she said, “like a lung valve study being done at Lahey where they can put one-way valves in my lung to preserve whatever is there.”

In the meantime, on a recent outpatient visit to Mercy Hospital to see Dr. Llanto, it was clear that Pamela was probably battling yet another infection. They talked about her symptoms, whether or not she is on oxygen at home (she is) and how she was feeling overall. Being a good listener is critical, said Dr. Llanto.

“You have to be patient, you have to be considerate, and you really have to listen,” she said. “For me, palliative care is looking at the whole human being and making sure that you follow what they want. Most of my patients want to die with dignity and comfort. I think that’s the most vital part of palliative care — ensuring they have quality of life in their remaining days, whether they are on active treatment or not.”

Before she met Dr. Llanto, Pamela was pretty much housebound. And since? “She went to Connecticut to celebrate her wedding anniversary with her husband,” said Dr. Llanto. “Her pain is much better controlled and she’s able to breathe better. She told me that this Christmas was a miracle Christmas.”

Instead, she wants to be home with her family. “And because I’m with Dr. Llanto, she’s also hospice,” she said. “We can flip the switch at any time to hospice. Whenever I think I”m ready we can flip that switch.”

But for now, said Pamela, “There is still quality in my life.”

Many people are confused about the difference between hospice and palliative care or have no idea how to access services. For more information, listen to this podcast I did with Dr. Diane Meier. She’s the director of the Center to Advance Palliative Care in New York. I also compiled of list of hospice and palliative care resources in Maine and New Hampshire, which you’ll find below. If you have further questions, send them to me and I’ll do my best to get the answers.