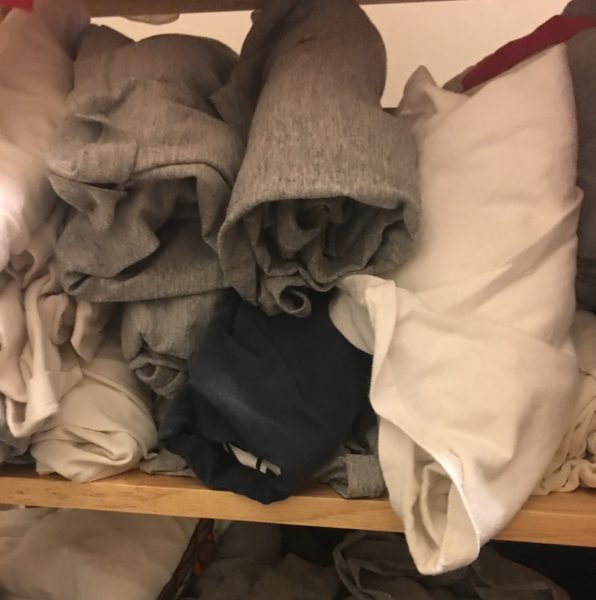 Jackie Conn’s husband Tim was the one who usually did the laundry. He liked to keep his t-shirts on a shelf by the washing machine. They’re still there, nearly seven months after his death.

I looked at them and thought, he’s not coming back to wear them. I have to do something with them. I picked up one shirt. He had a way of folding and rolling them. I thought I can’t touch these shirts. That’s like losing another part of him to unroll the shirt that he rolled up. Even while I’m thinking it now I’m crying. I think it’s weird but I can’t help it. I know the last person who touched these shirts and put them there was him. 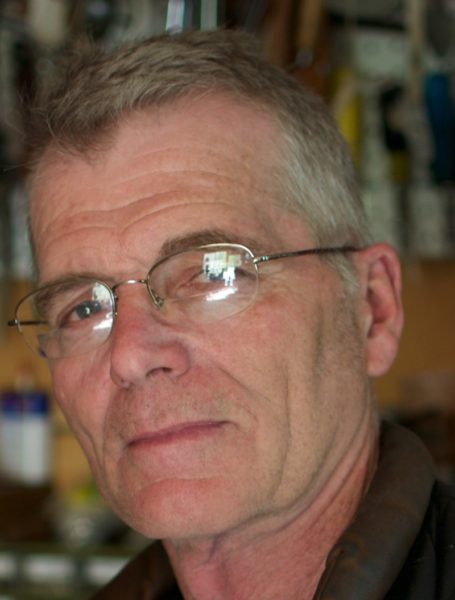 Tim Conn was a well known and respected leathersmith who had owned North Atlantic Leather and Repair in Maine since the early 70s. In January 2018, after exhibiting some unusual symptoms that seemed to be early onset dementia, he had a hemorrhagic stroke. He was going through rehabilitation at a local hospital when he had a massive stroke on the opposite side of his brain. He died at Gosnell Memorial Hospice House on February 18, 2018.

His diagnosis turned out to be something called cerebral amyloid angiopathy. Amyloid is a protein that builds up in blood vessels in the brain and makes them brittle so they crack and bleed. That’s what caused Tim’s strokes. I am going to write a separate blog post on it because Jackie and I both think it’s important for people to be aware of the condition. The purpose of this post is to share Jackie’s story of how she is working her way through the shock and grief of losing her husband.

If you read part one of Living With Grief, you will understand that everything Jackie has experienced (and continues to experience) is completely normal for someone who is grieving the loss of a significant person in her life. Even not being able to do anything with his t-shirts. 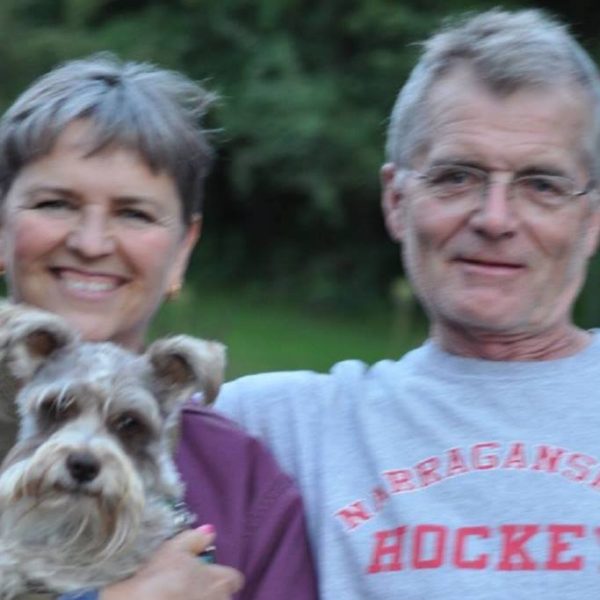 After the first time we went out we spent every day together.We moved in together in two weeks. He was really handsome and funny and kind and had a personality that just made everybody like him. He was just somebody you liked and trusted. And he GOT me. It’s hard to put into words. He understood me. He accepted me and all the different iterations, I guess would be the best way to put it. I could be me and that was ok.

They weren’t joined at the hip and did a lot of things apart. For instance, she’d spend time in Connecticut with her family, while he stayed in Maine running his leather shop and working as a longshoreman.

But we were always there for each other. Now that’s gone and I just feel kind of like I’m drifting. I’ve read that it’s common when you go through a loss like this. I don’t even know who I am anymore.

In the beginning, I cried every single day for four months straight. There wasn’t a day I didn’t cry. Sometimes it was just a few tears rolling down my cheeks and other times it was big wracking sobs. It doesn’t happen every day now, but I don’t get by a whole week without crying.

I saved his voicemails. My daughter and I sat there and listened to them and on one hand, it was comforting and on the other, we were both crying and thinking why are we doing this to ourselves? I saved them on a disk so they don’t get erased by mistake. 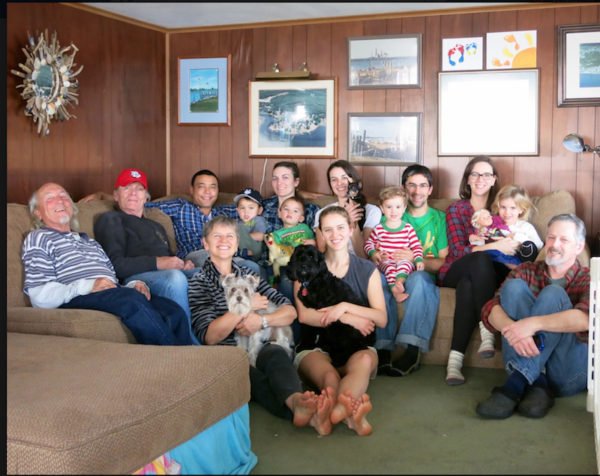 It still hurts as much, but it has evolved in some way. I’m getting used to THIS life and when I think back to the life I don’t have any more then it hurts again. It’s kind of fresh again and I have that feeling of where do I go, what do I do? I’m lucky that we have a lot of family. A lot of support.

This summer she decided it was time to sell some items in Tim’s leather shop.

My four daughters came and helped. It was the first time we could all go into his shop. It was really hard because his personality and presence were so strong in there and we never went in unless he was there. It took us a while to go in and spend time, but it was kind of a family thing and that felt good. 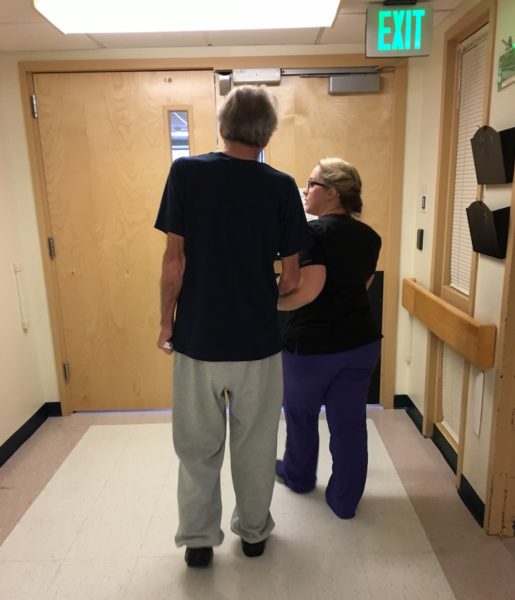 But even if she is doing better, there are still triggers. For instance, at a recent conference for her work (she’s the general manager of Weight Watchers of Maine), they discussed an online presentation that she had listened to in the hospital cafeteria back in February when Tim was upstairs doing occupational and physical therapy.

I was thinking that everything’s going to be ok, be normal. Then a few weeks ago at a conference, a reference was made to that presentation and I thought I was going to have to walk out of the room. It just really took me back to that place when I was thinking I had to keep up with my work, that things were going to continue as normal. I had no idea that in less than a week he was going to have his second stroke. I decided that I could get up and leave the room if had too, but would try to stick it out. It was hard.

One thing that has surprised her about herself is that she always thought of herself as being pretty independent but she’s come to realize how much she depended on knowing that Tim was always there.

I came back from Connecticut yesterday morning and typically I would pull in the driveway and he would come out and he’d be smiling and ask what I needed him to take into the house for me. It’s not that I miss having somebody who does stuff for me, it’s the greeting and specifically, the greeting from him. Nobody is coming out and even if they did, it wouldn’t be the right person.

When he was sick I thought we were going to get through this. We’d gotten through a lot of things, so we’d get through this and all of sudden you’re not and he’s really gone. I feel like I should be able to go over to the rehab hospital and be there with him and he’s not there. When I’m at work I feel like well, I’m going to go home and he’ll be there and it’s really hard still. He’s a man who had a big presence, but he’s just not anywhere I can go.

I sent Jackie an email last night to let her know I would be publishing her story this morning and to ask if she had anything she’d like to add about how she is doing right now. This is her reply.

I will probably be driving back to Maine

[from Connecticut] when you post this. I try to keep my thoughts on a short leash. I try to think about the here and now. If I let my thoughts stray to think about pulling into a driveway and seeing the weeds in his gardens and walking into an empty house I lose it. The pain is worse than the day his rehab doctor asked me to step into his office to kindly suggest it’s time to consider palliative care and hospice.

Like Tim Conn, Gloria Tewhey also had a big presence. September 29th will mark the first anniversary of her death and her family is planning a “Gloria Day” celebration. One thing her husband John has noticed since her death is that he has fewer friends but more intense friendships.

Some people who I used to be very friendly with make sure not to engage with me. They don’t know what to say. Just say “I’m sorry.” I’m happy to talk about Gloria. I love talking about Gloria.

John and Gloria were together for nearly 60 years. He’ll share how he has been coping with her death in part three of Living with Grief.