Tapping into the healing powers of sound and vibration 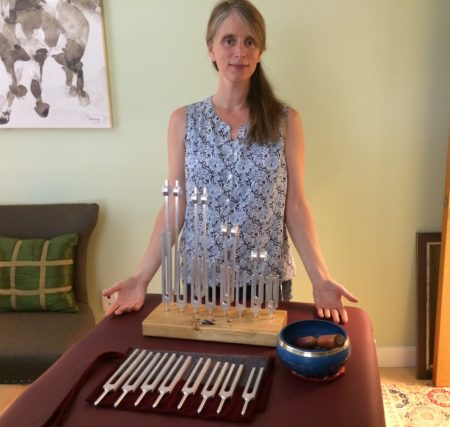 Guest post by Shawn Marie Higgins, DO. Dr. Higgins is an osteopathic physician in Portland Maine. She has several years of experience studying, researching and performing sound and vibrational healing.

I’ve been an energy healer since my early twenties. Ever since childhood, as early as I can remember, I’ve had a special love for and ability to connect with animals and nature. Although I chose a very scientific, left brained health profession (osteopathic medical doctor), I’ve always had a holistic perspective of the human body (and the bodies of all species, for that matter). I’ve always had an intuitive ability to perceive human auras and energy fields and to “tap in” to “the other side,” so to speak.

I first had the idea to use sound for healing several years ago during an osteopathic treatment that I was performing on one of my patients. I typically start my sessions with a cranial-sacral assessment of the patient’s body and aura. During this particular treatment session, I entered into a meditative state, just like I usually do. This session was different, however, in that, I found myself in a meditative state much more quickly than usual.

I was able to actually see my connection to the ether or air around me and my connection to everything else in the room. I could see my own energy field and how it connected to the patient’s energy field, and how both of our fields connected to a larger field of everything else around us. I could feel my entire body vibrate very intensely and I felt as though I was falling backward out of my chair.

I could see that I hadn’t physically moved, but that I had shifted the vibrational frequency of my body! This shift felt very physical to me at first. Now, after having done it many many times, it feels more like I’m falling into freedom, into the healing hands of friends, where I’m able to let go of physical boundaries and limitations.

During this treatment session, I had an epiphany that I should be doing this very thing – shifting vibration – in order to access deeper healing with my treatments. I was shown that when doing this, the patient’s vibrational field also shifts and allows for multidimensional levels of healing to occur.

Since I’ve been a musician for many years it seemed only natural for me to use music as my means for vibrational shift. I had an urge in that moment to use music during my healings and that it would greatly enhance the effect of the treatments. And it did … way more than I could have ever imagined.

I began researching sound healing and the use of healing tones. I researched the various musical instruments used for healing. I came across a plethora of information about tuning forks on the internet.

I already had one weighted tuning fork at home that doctors traditionally use in order to assess hearing. I hadn’t used the thing in years, but as an experiment, I brought it into the office one day and began using it on the patients. I knew it couldn’t hurt anyone, and, if anything, would at least provide for some amount of entertainment.

I tried it one day on a lady with advanced Parkinson’s Disease who came in complaining of severe, debilitating rib pain for years. She was in a wheelchair some of the time, but also able to walk with a cane with very poor posture. I toned the fork and placed the stem of the vibrating fork on her rib cage at the site of the pain. She reported improvement in the pain after just one treatment. She asked for the tuning fork treatment at every visit thereafter.

I began using the fork on myself at home every day and journaling the effects. I was pleasantly surprised. I began experimenting with different types of tuning forks and different musical scales. Each has unique healing effects and benefits.

The more I worked with the forks, on both myself and on patients, the more skilled I became at using them and at intuiting which type of fork and which musical scale to use with each patient. I began to more and more easily discern between the different vibrations of each frequency without even looking at the frequency printed on the tuning fork – I could sense the vibrations by feel.

I studied musical ratios and musical intervals which lead me to understand the connection between sound, vibration, our physical world and the universe. Sound creates shape. Sound changes the structure of physical matter. I came to realize that I was actually studying quantum physics.

My efforts in research were and still are greatly rewarded. It seemed that with increased awareness about the effects of sound as a whole, the more magnified their effects became. This is quantum physics! And this is true of everything. The more energy we put into learning something and the more we believe in its effects, the stronger those effects actually become. 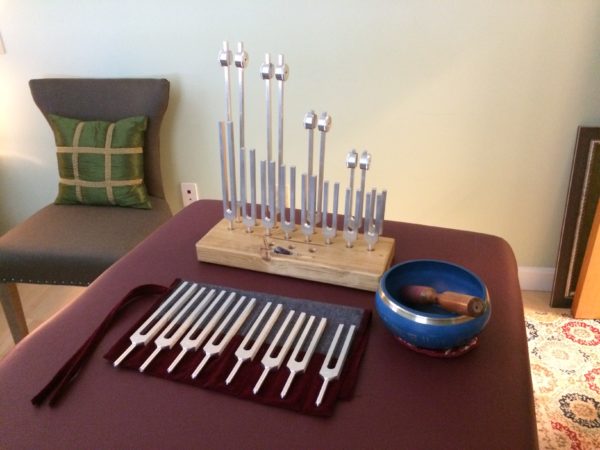 How does sound healing work?

Sound is vibration. By definition, vibration is a wave of pressure. Therefore, sound is actually energy that transmits as a wave via pressure gradients through any medium such as air, water, glass, metal, body tissues, etc. These waves of pressure are measured in frequency, which is the speed at which they’re vibrating (the number of oscillations per second, or cycles per second).

In fact, we have known for many years (by the laws of quantum physics) that everything in the Universe is vibrating. And everything vibrates at its own speed or frequency. Just like everything else, each sound, each musical note, each tone has its own vibration and thus its own frequency. Each frequency has a different effect on our bodies. Since everything is vibrating, everything has the possibility of affecting us, either for better or for worse.

Sound healing can be done with many different instruments. As the story tells above, I use tuning forks for sound healing because they resonate so perfectly with my particular style of healing. All forms of sound healing are incredibly beneficial and I recommend choosing the one or ones that feel right to you.

The key to using sound for healing is the ability to create a pure tone as opposed to noise. The musical scales that are used with most healing instruments are ancient healing tones that have been used for the sole purpose of healing and enlightenment for thousands of years.

Sound healing can be done in person or long distance. Both types of sessions work wonderfully. A typical in-person sound healing session begins with the patient lying on a treatment table, comfortable and relaxed. I also perform osteopathic cranial, energy and crystal healing during most treatments. I use both weighted and unweighted tuning forks.

The unweighted forks are used very close to the ears or close to some other area of the body, but not touching the body. The fact that there is no weight attached to the tips of the fork means that the energy waves are transmitted through air. These sound waves penetrate the body tissues or ear drum and work in this way to remove physical, energetic and emotional restrictions and blockages.

The weighted forks have weights on the tips. This transmits the energy down the fork into the stem. When the stem is placed on the body it creates a physical sensation that you can feel. It’s a very comfortable feeling, almost as if you’re being covered up with a blanket of vibration. This type of tuning fork can be placed directly on the body – on bone, ligament, tendons, fascia and muscle tissues.

The specific frequencies encourage healthy reorganization of bone and cartilage tissue (proper bone breakdown and buildup). They encourage increased blood flow to and drainage of old blood and lymphatic fluid from any place in the body.

These forks can be placed on the cranium to release strains at suture lines where cranial bones join together and sometimes become stuck or compressed. This allows for free movement of the cranial bones, blood and lymph drainage and renewal in the brain and spinal cord, and free exchange of blood and cerebral spinal fluid through the blood brain barrier.

These tuning forks also work really well for cartilage regeneration in areas such as the knees, which have relatively poor blood supply naturally. They also create sound that we can hear and can penetrate tissues by waves that move through the air (just like unweighted forks). Weighted forks make a very low hum drum, buzzing sort of sound that, to me, feels like an ocean of peace.

Remember … the healing doesn’t happen because there is just something vibrating. It’s not working like a massage or a percussion hammer. It’s the specific frequency of the vibration that is encouraging the self-healing mechanisms already contained within the body. Even though a vibration might feel gentle or soft, they are precise in their healing capabilities. Greater precision means greater potency for the power of healing.

To give you an idea of what the tuning fork treatments are like, here is a short video demonstrating two simple techniques using both the unweighted and the weighted forks.

Dr. Shawn Marie Higgins, DO is an osteopathic physician in Portland Maine. She has several years of experience studying, researching and performing sound and vibrational healing. She also does osteopathic manipulation, cranial osteopathy, medical intuition and Reiki at her practice Osteopathic Wellness.