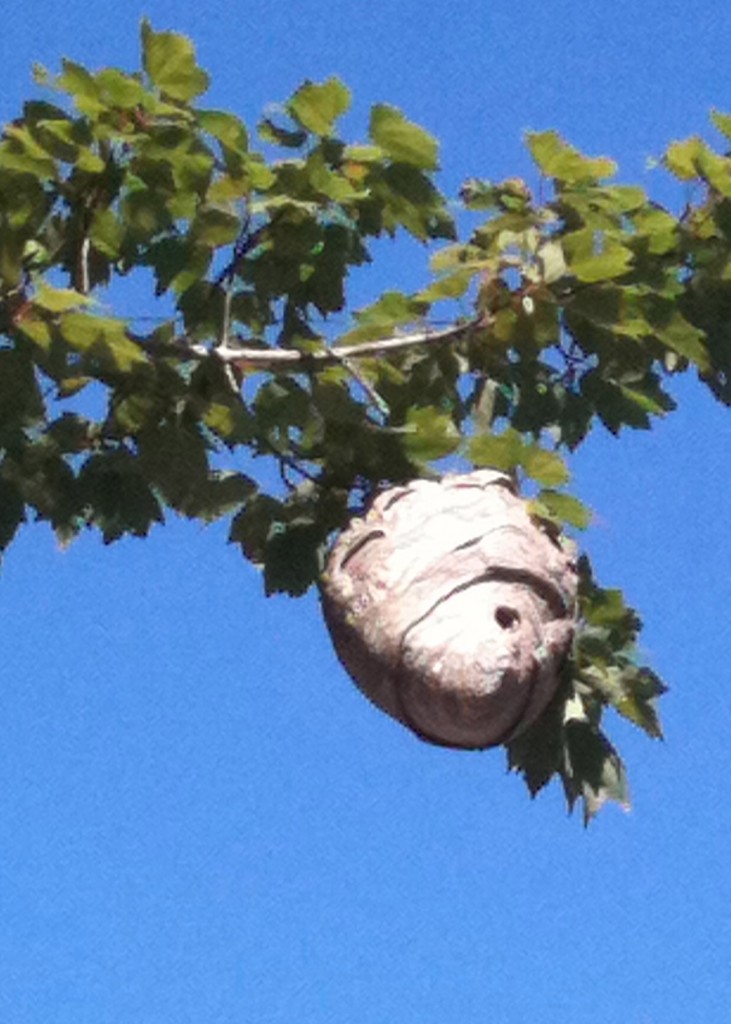 Ricker Hamilton was out mowing his lawn and got stung in the leg by a wasp. Most of us would be supremely annoyed and might have to endure some pain, itching, and swelling for a few hours. For Ricker an insect sting is a life-threatening situation. It was his third encounter in 20 years and in terms of how quickly his body began to react, the scariest. “Luckily,” Ricker told me, “my son was with me and knew what to do.”

Five years ago he got stung by a yellow jacket.  “It was on my ring finger on my right hand. I kept trying to knock it off and it kept stinging me.” Within 15 to 20 minutes Ricker’s blood pressure dropped, he was covered with hives, and had difficulty seeing — all symptoms of anaphylaxis. Anaphylaxis, or anaphylactic shock as some people call it, is a rapidly developing serious allergic reaction that affects many areas of the body at the same time. It’s usually triggered by eating or being injected with an allergen — like insect venom.

Ricker carries an EpiPen, which is an automatic injection device filled with a single dose of epinephrine. It counteracts an allergic reaction by relaxing the muscles in the airways and tightening the blood vessels.

When he got stung in the leg by the wasp, Ricker’s EpiPen and the quick action of his son, who plunged it into his thigh, probably saved his life. This time, he started to go into anaphylaxis within three to four minutes. Let that sink in for a minute. Three to four minutes. If he had been alone or didn’t have his EpiPen with him, Ricker may not have survived the wasp sting.

Screening for risk
You may think that spring and summer are the seasons for stinging insects, but they are prevalent in Maine through early fall. Dr. Marguerite Pennoyer, a Portland allergist/immunologist says she gets a lot of calls about insect stings that time of year.

The majority of people will develop a reaction just in the spot where they were stung. About 10 to 15 percent will have a larger area of swelling that can last up to a week. It’s rare for someone to have a serious allergic reaction — about 0.5 percent of children and three percent of adults will experience anaphylaxis. It’s estimated that 40 people in the United States die every year from a venom allergy. Bear in mind that someone who has been stung multiple times, say by a swarm of bees, may not necessarily be allergic, but may react to an overload of toxins.

Unfortunately, there is no reliable screening method to let you know your risk before you get stung. “We can’t reassure people by testing,” says Dr. Pennoyer. “More than one-quarter of non-allergic people who are skin tested for insect venom may be positive at some point in time and yet not be at risk. And people who are negative can turn positive. Testing is most helpful in determining treatment for people who have had a reaction to an insect sting.”

Jon Cooper’s story
Jon Cooper had no idea he had a serious allergy when he was stung several years ago. He opened the door to his boathouse to get his canoe and got stung on the top of his head. He’d been stung many times before, but this time within five minutes he began to feel faint. “I lay down on my dock for quite a while. I remember I had tunnel vision and felt weak, as if I were very drunk or in a dream state. My wife Leanne, who is a nurse, came home and recognized the signs immediately. My blood pressure had dropped and I was close to being unconscious. She called 9-1-1 and they took me to the ER.”

He spent the afternoon in the ER and slowly came back to reality. ” I was disoriented and shaken when I realized that I had had a serious reaction. That part was really shocking — to realize that it had happened out of the blue.” He also had a psychological reaction. “For quite a long time I felt very vulnerable knowing that I could be completely wiped out so easily by something like that.”

Today, Jon feels comfortable sitting outside, but he’s far more cautious. “I was in oblivion before, but I don’t walk in the grass barefoot anymore and I always check the shed or old buildings and doorways before I walk in.”

Stinging insects to avoid
Don’t wait to be stung to find out if you’re allergic. Learn which insects are more likely to cause serious reactions and how to avoid them if you can.

Honeybees commonly nest in tree hollows, logs, or inside buildings. You should also be careful walking barefoot on a lawn covered with clover. They can be aggressive if they believe their hive is being threatened. It is the only stinging insect that routinely leaves the stinger in your skin.

Bumblebees are usually mild-mannered and will sting only when provoked.  They primarily nest in the ground, but occasionally you’ll find them nesting in discarded debris that you may have left outside.

Yellow jackets build nests similar to paper wasps only smaller and usually in lawns or the base of trees or shrubs. Sometimes they will build inside openings in a wall or between the rafters in a house. They tend to be aggressive whether they’re protecting their nest or not and will sting multiple times, as one did with Ricker. Yellow jackets belong to the same social family as hornets and paper wasps.

Bald-faced hornets are big and build equally big, impressive paper nests. They can be aggressive and quite dangerous when threatened or disturbed. They can also sting you just because you are nearby mowing the lawn or working in the garden. Be on your guard if you spot a nest near a doorway, under the eaves, in a shed, or in foundation shrubs. If you kill a hornet near its nest, the entire nest may come after you, so be careful! Paper wasps usually build their nests in protected, but exposed areas, such as under an overhang or in trees or shrubs. They produce a papery material to construct their nests, which are open-celled instead of completely wrapped in the paper. They fly relatively slowly with their legs held below the body and are tame compared to their cousins (especially yellow jackets). If threatened or disturbed they can deliver a painful sting. Venom immunotherapy
After his experience, Jon saw an allergist who determined he was allergic to mixed vespids, which generally includes certain wasps, hornets, and yellow jackets. For the next couple years he had weekly allergy shots to desensitize his immune system to the insect venoms. Knock on wood, he hasn’t had a problem since, even when he got stung a few years ago.

Dr. Pennoyer says if you know you are at risk you should work with your doctor to create an emergency action plan in case you get stung again. She also recommends seeing an allergist who can do a skin test to determine what venoms you’re allergic to and discuss whether or not you should undergo the series of shots that Jon had. That’s exactly what Ricker Hamilton decided to do. The next time he may not be so lucky, and he doesn’t want to take any chances.