Over 60? More important than ever to get some exercise!

Since you’ve all probably heard it too many times to count, I’m only going to say this once: Exercise is important. Move it or lose it! End of lecture.

Instead, I’m going to let some of Patty Medina’s students offer up a bit of inspiration. She teaches the Fit to Live class for people who are 60+ at the Community Center in South Portland, Maine. 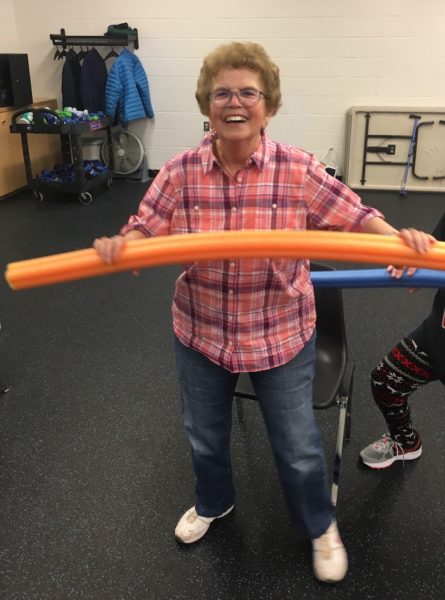 Denise Lord exercises every day and also teaches a chair exercise class in the retirement community she calls home. She’s always done some form of exercise — started lifting weights in her mid-sixties — and has been taking Patty’s class for a few years.

With the weights, I can really notice a big difference in the musculature of my arms. I can feel that little walnut in there and I’m stronger. Since I started working out with Patty, I walk straighter — my head is on top of my spinal column. You want to stand up straight and tall, even when you’re just pushing a basket around the grocery store. 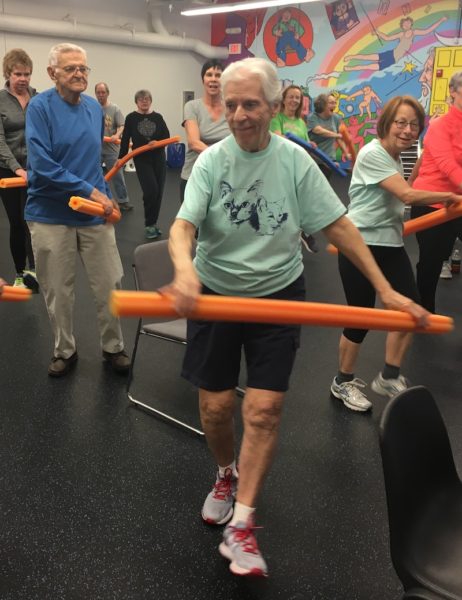 Betty Moberg and her two sisters have participated in the Maine Senior Games for the past 20 years. They started doing it because they were looking for a challenge. She’s been exercising with Patty for 16 years and says it’s good for her body and her mind.

We do everything, all kinds of different exercises. It’s not just one thing. She changes things to keep our brains going. You feel so good physically that you just want to keep coming back. If I didn’t do this I’d be sitting in the chair watching TV or on my iPad. I would not miss these classes unless I was sick. You can’t do it at home by yourself. Well, you could, but it’s just not the same. 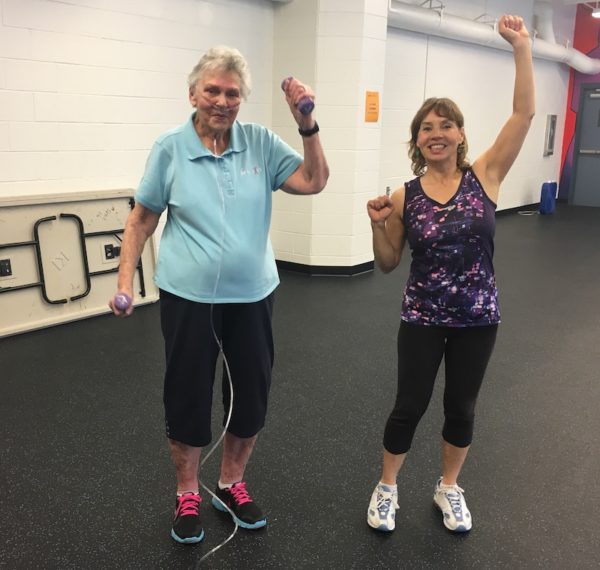 Connie Brown has been coming to class for about six years, even though she’s on oxygen because she has COPD (chronic obstructive pulmonary disease) and uses a cane because she broke her hip a few years ago. Neither stops her from exercising.

I don’t know where I’d be without it. Every time something happens and I end up in the hospital I think about coming back. When I do, oh, my gosh, it’s so wonderful. Without it, you just go down fast. I can’t even explain this group and the love that’s in that room for everyone. 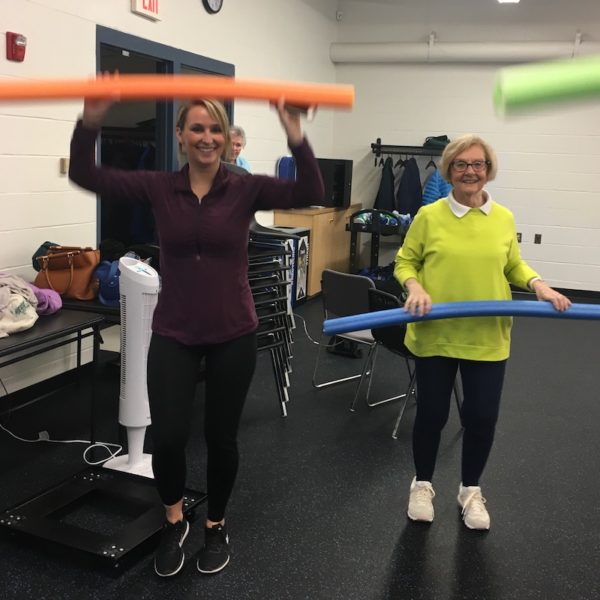 Several people in the class have medical issues. Maureen Harper, whose granddaughter Sarah sometimes joins her in class, has a lot of health issues, including a heart problem called tachycardia arrhythmia. She has a defibrillator and her doctor’s blessing to exercise regularly.

A lot of my health issues have been better since I’ve been exercising. Every checkup, my doctor is amazed at the good shape I’m in. I do a class every day. I think it’s sad when people become lazy because there is so much to do. I can’t sit still.

Sarah says her grandmother also walks the track every day.

I’ve been walking with her for maybe five years. At first, she wasn’t so fast and now she’s really fast. She walks and jogs. She’s come a long way. 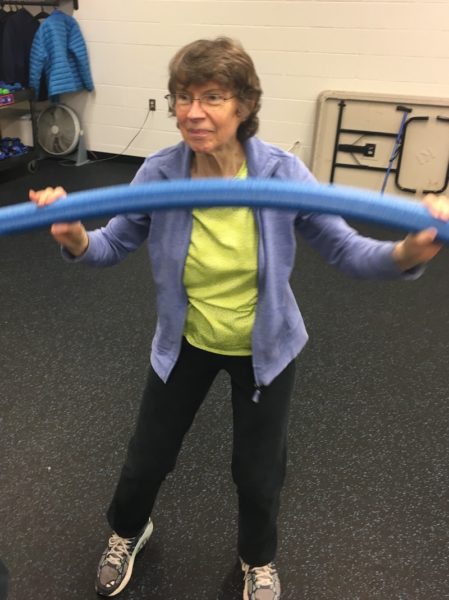 Roberta Libby was diagnosed with Parkinson’s in 2011. Patty’s class has been part of her life since the beginning.

It’s quite an experience hearing you have an incurable disease that is only going to get worse. It’s pretty well known that when people with Parkinson’s exercise the disease progresses more slowly. I’ve been to a few neurologists and they’ll say you exercise, right? We do a lot of balance work here and it’s everything I need. I was always one to say I don’t want to get in a car and drive to an exercise class. I don’t want to take that time. Now I don’t want to miss it. 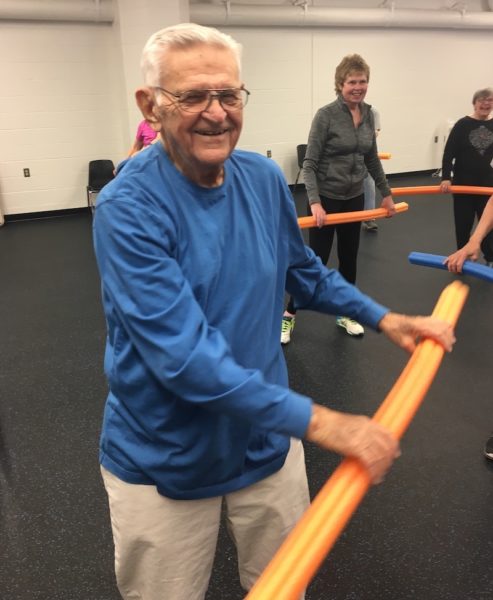 Frank Carroll also hates to miss class. At 96, nearly 97, he’s the oldest member of the class. He’s outlived two spouses and now lives in a retirement home that’s like a small community. He’s always led an active life, mostly as a runner and a tennis player. Recently, he had a medical setback and spent a few days in the hospital. He was eager to get back to his regular walks and Patty’s class.

Patty has done a great job with me and for the group and I appreciate that. Hopefully, I’m going to get back on track. You’ve got to keep going or else you’ll stop. 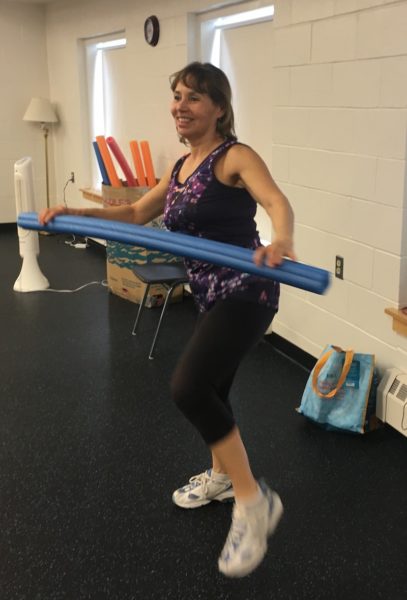 There is little that stops any of Patty’s students. She’s been motivating people for the past 35 years because she knows how important it is to keep moving.

The thing is if you’re doing a lot of sit down crossword puzzles there’s no body-mind connection. Your muscles are not learning how to move and they atrophy. We work on changing bad habits, keeping good alignment, good posture, keeping muscles flexible and strong so they don’t tighten up, and getting the blood flowing.

The social interaction is also very helpful. Lots of studies are showing that one of the key points to staying alive and young and having a productive life is to have interaction with others. When you stay home alone, without any interaction, watching tv, not moving, it just really minimizes your world.

If you live in South Portland, Maine check out Patty Medina’s Fit to Live class at the South Portland Community Center. If not, maybe there’s another good program in your community. Take it from this group, it’s well worth the effort to find some way to keep active as you age.