When should you be concerned about heartburn?

If you were to ask me if I ever have heartburn, a few years ago I would have answered no. It turns out I was quite wrong.

I had an endoscopy last week — Dr. Doug Howell, my gastroenterologist, threaded a scope with a camera on the end of it through my mouth, down my esophagus and into my stomach. Pleasant image — right? I’m grateful for the medication that prevented me from participating on a conscious level. This picture is courtesy of my husband Barry, who thanks to Dr. Howell, was allowed in the room. 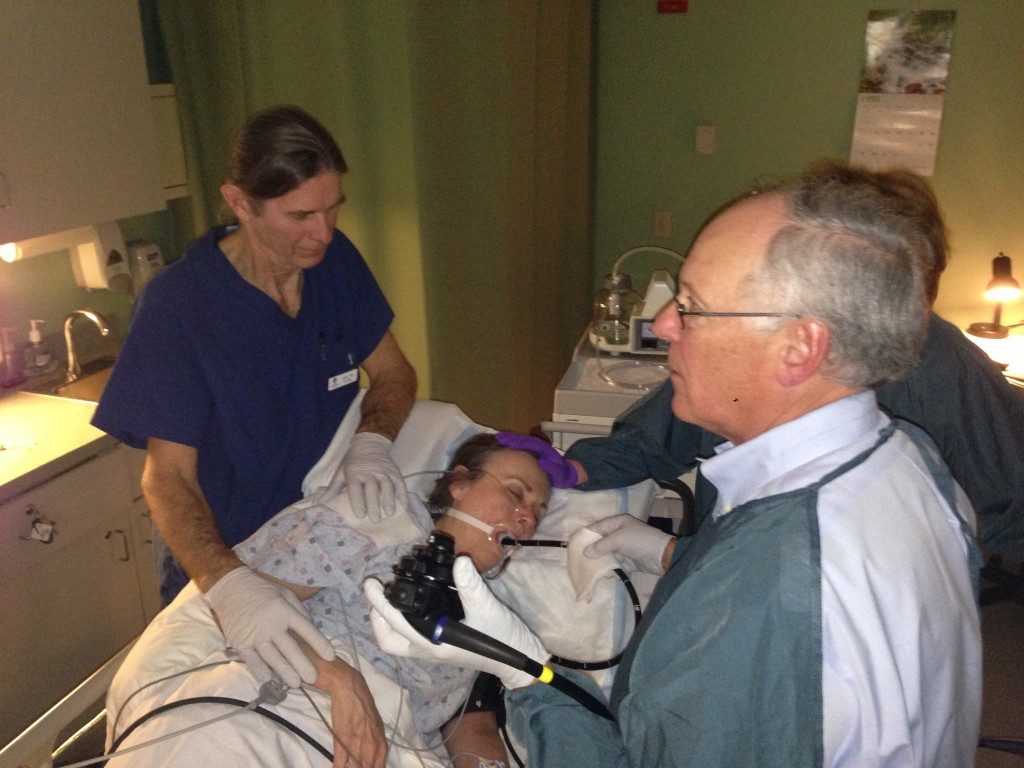 I had the endoscopy because I’d been having some strange symptoms for a year or more. Instead of what I would consider normal heartburn, I would often get hoarse and have to clear my throat after a meal. A few times food got caught in my esophagus, which is pretty freaky. All I could do was stay calm and take deep breaths and within a few minutes all would be clear. Another scary thing that would happen without warning and usually when I was resting was a sharp, sharp pain in the middle of my chest. The first time it happened, I had a cardiac workup to make sure it wasn’t a heart attack.

The endoscopy uncovered the cause of all those strange symptoms. Acid. “It’s due to leakage of stomach acid because of what’s called an incompetent lower esophageal sphincter,” said Dr. Howell.

The sphincter is a circular band of muscle at the bottom of the esophagus. When we swallow it relaxes so that food and liquid can pass down into the stomach. Then it’s supposed to close so that stomach acid doesn’t flow back up into the esophagus. My valve doesn’t close properly. As Dr. Howell put it — “Your sphincter has failed you, Diane.”

The persistent leakage of acid caused some esophagitis (inflammation) in the lower part of my esophagus, which made it narrower. There’s a name for the narrowing: Schatzki ring. “Everybody has a ring,” Dr. Howell explained. “It’s usually wide enough so that nothing ever gets caught. If it gets a little bit damaged, a little bit inflamed, it tends to narrow and catch your food.”

During the procedure, he stretched the Schatzki ring with a balloon, which should solve that problem.

The sharp pains I would sometimes get were also due to acid, says Dr. Howell. “The cause of an esophageal spasm is usually acid reflux. Acid goes up the esophagus, which is unable to protect itself because the valve is no longer working. The remainder of the esophagus goes into an intense spasm to protect you from the acid getting all the way up your esophagus into your throat. It’s sort of a protective reflex.”

That’s a lot to take in, especially when you’re still groggy from the procedure. The most reassuring information was that I didn’t have cancer or a precancerous condition. I have gastroesophageal reflux disease (GERD). Everybody experiences reflux. When it happens a lot or symptoms and/or complications occur, it’s considered GERD — an extremely common disease in this country — affecting nearly 30 million people. I don’t have any of the common risk factors. Just luck of the draw.

Nearly everybody gets heartburn from time to time. The symptoms are usually triggered by eating certain foods. Take an antacid and watch what you eat and you should be fine. If your symptoms are severe or you have to take over-the-counter medications for heartburn more than twice a week, you should see your doctor.

Known risk factors for adenocarcinoma of the esophagus

Dr. Howell recommended that I take an over-the-counter PPI or proton pump inhibitor for the next three months to prevent my stomach from producing acid and to give my esophagus time to heal. Because using it long term may reduce the absorption of important nutrients, vitamins and minerals and increase the risk of bone fractures and some infections, I’m going to carefully weigh the risks and benefits.

Because I don’t have the common risk factors, it may be a challenge to keep the acid at bay with lifestyle changes. One thing I’ll try is giving up peppermint, which I eat frequently — Mentos, Altoids, mints, tea — I like them all, but apparently, peppermint relaxes the valve that has failed me.

Talk to your doctor about what alternative GERD treatments may be safe for you. Options may include:

I’d rather not have GERD, but I’m glad to know what was causing my strange symptoms. If you have it too and want to pass along some advice, please do.