If you were in the hospital, think your kids would feel helpless? See how Super Jonny copes

In 1998, Simone Colwill was diagnosed with Crohn’s disease — a chronic inflammatory disease of the intestines. At the time, she had a two-year-old and a three and a half-year-old and was expecting her third child.

Over the years, she was in and out of the hospital, which was always hard on the children. She tried to find a book that would help teach them about hospitals and empower them to help. She couldn’t find what she was looking for so eventually, Simone wrote her own book.

The idea took form during an especially long hospital stay several years after she was diagnosed. She had surgery and was hospitalized for a little over three weeks.

Inspiration came in the guise of Spiderman, who paid her a visit in the hospital. Underneath the superhero costume was Simone’s fourth child Jonathan, then five years old.

Her book, which is titled What Does Super Jonny Do When Mom Gets Sick? tells the story of a young superhero named Jonny and his stuffed animal sidekick Bear. When Jonny visits his mom in the hospital he gets to meet all the people who will be treating her. He learns what they do and in his own charming way offers to help.

Super Jonny tells the doctor, for instance, that he can use his magnifying glass to help him find out what’s wrong with his mother. To the x-ray technologist, he offers his night-vision binoculars.

Simone got in touch with me about her book after she read my post Having an x-ray? Show some love and kindness to your technologist. Like me, she was once a radiation therapist.

“I decided that I wanted to write,” Simone explained to me, “to help women like me who are parenting with chronic illness. (Now that I have a lot of experience of hospital life from both sides of the bed!). I also have an insider’s view of what it is like to have a chronic illness and where women like me need empowering!”

Simone’s home is in Aukland, New Zealand. (Can you believe that? People from around the world do read Catching Health. Marty Baker, for instance, who lives in Newcastle upon Tyne in England. A while ago, I wrote about his special friendship with Fran Houston, who lives in Maine, and the book they’re writing together — Gum on My Shoe: One Step at a Time With My Bipolar Best Friend. But Marty lives a mere 3000 miles away. Simone has him beat by 6000 miles. She’s 9000 miles from Maine, in the land down under!)

Not only for kids

The story of Super Jonny was written for children (aged three to nine), but teachers are also an important part of the target audience. Simone worked with the ministry of education in New Zealand to write a one-page teacher’s guide at the back of her book. “Teachers can use it in the classroom,” she told me. “This means teachers now have a way to support a child with a sick relative.”

Prompts include asking what they think the book is about, what they know about visiting a sick person in the hospital, and what they might do to help.

Another page at the back of the book has suggestions for preparing your child if you know you’re going to be admitted to the hospital.

There is a U.K. English version and a U.S version — both have received good reviews. In October 2015, USA Best Book Awards picked it as the winner in its Children’s Picture Book: Softcover fiction category.

“Super Jonny falls into the ‘difficult discussions’ genre,” says Simone. “(Just like Crohn’s disease!!) I hope that by sharing my story it will raise awareness about the disease and encourage people to get themselves checked. I also hope that it will encourage people to consider supporting the efforts of the IBD (irritable bowel disease) researchers.” 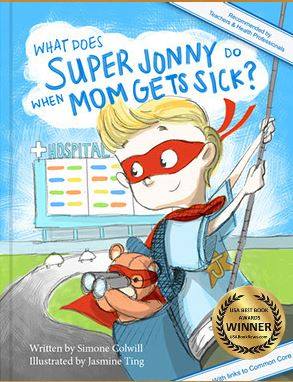 To get more information or to order a copy of What Does Super Jonny Do When Mom Gets Sick? visit Simone’s website. By the way, the colorful illustrations were done by graphic designer Jasmine Ting, also from New Zealand.

Thank you for reading this short review of Simone Colwill’s first book. I believe she has more books in the works. I’m always interested in hearing about people who have reinvented themselves or taken on a new career. Simone was once a radiation therapist and now she’s an author.

You might also want to check out my reviews of two book by Maine author Sally Loughridge. Rad Art is about her experience having radiation therapy treatments for breast cancer. Daniel and his Starry Night Blanket: A Story of illness and Sibling Love is about a little boy whose older sister has cancer. Sally was once a child psychologist. She is now an artist and an author.

Simone and Sally were motivated to start writing because of personal experiences. What about you? Is there a book you’d like to write someday? Put your dream in writing! Share it with us in the comment section below. ~Diane